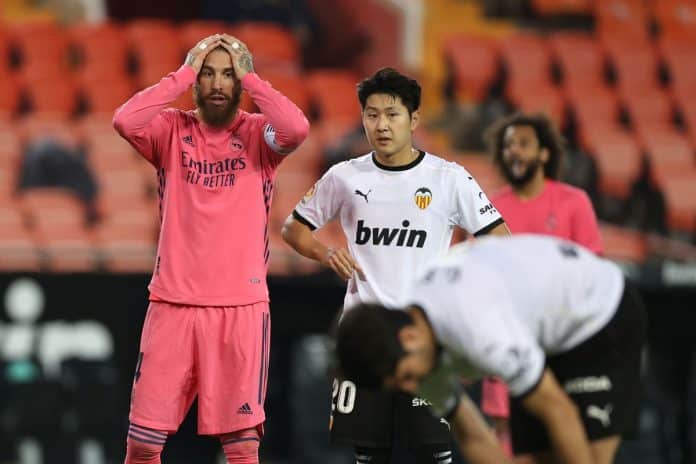 Real Madrid could risk losing their captain if they don’t match Sergio Ramos’ demands regarding a new contract with the club. El Larguero report that the player had a meeting with Florentino Perez before the game against Elche, and rejected the President’s advances towards extending the contract.

It is understood that Sergio Ramos was rigid on his demand for a two-year extension with Real Madrid, but the club only wanted to offer him a one year deal at the time, with the option for a further year left to later. According to the latest developments, Madrid are willing to offer him a two-year deal, but Ramos will have to take a wage cut.

Talks between the two parties have now reached an absolute stalemate, and the Daily Mail report that Ramos is now keen on joining Paris Saint-Germain. The Madrid captain told Florentino Perez that the French club will be building a super team with himself and Lionel Messi as the top players in the club.

Elsewhere, Manchester City are also waiting in the wings to potentially sign Sergio Ramos. The Premier League club are not only willing to match his wage demands but are also willing to give him a two-year contract as demanded.

Considering the abundance of quality centre backs at the Etihad already, it is difficult to see Ramos realistically moving to England amidst concerns over playing time.

Sergio Ramos has spent the majority of his senior career with Real Madrid and has become one of the most important players in their history, guiding the club to numerous Champions League titles, alongside other pieces of silverware as well.

It is no doubt that the club are in dire need of the Spaniard’s leadership at the back, but should an agreement not be found between the two parties, Madrid could find themselves without Ramos for the first time in what feels like forever.