SC East Bengal gets their first win in ISL history 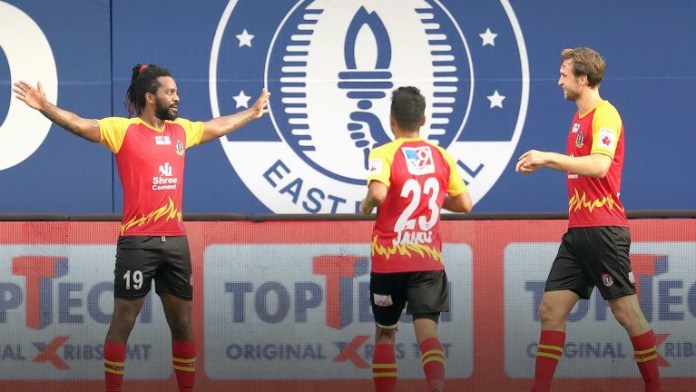 SC East Bengal finally returned to the winning ways in the first match of 2021. They beat Odisha FC by 3-1 today and sealed their first victory in Indian Super League.

SC East Bengal’s manager Robbie Fowler has made some changes in the line-up today. Raju Gaikwad made his debut today after signing the deal on 1st January.

In the 12th minute of the game, Anthony Pilkington put SC East Bengal into the lead from a close-range header. Raju Gaikwad’s long throw-in ability helped SC East Bengal to score the first goal. In the 39th minute, Jacques Maghoma doubled the lead for SC East Bengal with a thunderous strike.

Odisha FC tried hard to get back into the game but failed to deliver the end product. In the 88th minute, SC East Bengal punished again as debutant Nigerian striker Bright Enobakhare scored his first goal for SC East Bengal. Odisha FC pulled one back as the consolation in the injury time.

After the match, SC East Bengal boss Robbie Fowler said, “It’s always nice to get a win also our first win. That’s one game in five we have lost now. It was a good, professional performance. This club is all about progression and we will try and get for the future. We are building, there is a lot of work to be done and we will continue to do that. It is a great win and a great start to the new year and hopefully, it will continue.”

“I think all the players were impressive. Few of the new players came in. (Anthony) Pilkington was once fantastic, Jacques Maghoma probably had his best game, he was brilliant. All our players were good.”

“We didn’t change our system. We have our style of play and we want to try and keep it simple. When you do that it becomes a bit easy for everyone. It is not about formations or certain players. Players have a role. With the quality we have, even today if we see, Pilkington’s goal, Jacques’ goal. Not to mention Bright (Enobakhare). Bright was fantastic. He made the game so simple. He looks like an unbelievable player.”- he added.