Volkswagen develops the prototype of its EV charging bot 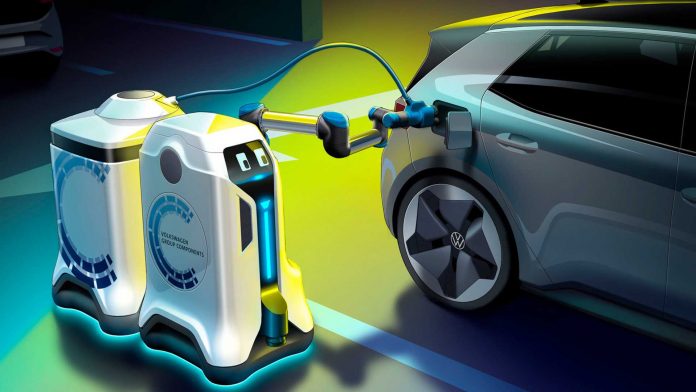 Electric vehicles are becoming the sought out technology of future transport. Volkswagen is a name that has created a place for itself in the global automobile market. It’s no news that the company is not only in making cars but also actively working on innovations in the field of AI and Machine Learning.

Recently the company announced that it made a prototype of the electric vehicle charging robot concept. It first showed off in proof-of-concept form in late 2019. Though it is a prototype, Volkswagen is optimistic enough to work the same as it’s supposed to.

When an electric vehicle is parked in a parking garage, the driver or the car itself can request to have the battery topped up. The robot detaches from its docking station, hooks up to one of a dozen or so mobile batteries, which it then drags to your car. It will then plug the battery into your car return to its station, waiting for other charging requests.

Once the car finishes charging or come to unlock your car, the robot collects the battery and brings it back to the charging racks; of course, it will stop letting other cars and pedestrians pass by along the way.

In electric vehicles, we often speak about the future advancements that tech companies will bring to the table. But the fact that the companies are still lacking in a fast charging and automated solution for electric cars is still a daunting factor.

Having a simple R2-D2 version robot to make cars’ auto charging sounds interesting but will not solve the problem. If Volkswagen manages to make their new invention from a science project to a Jarvis level invention, we may significantly advance the EV market.