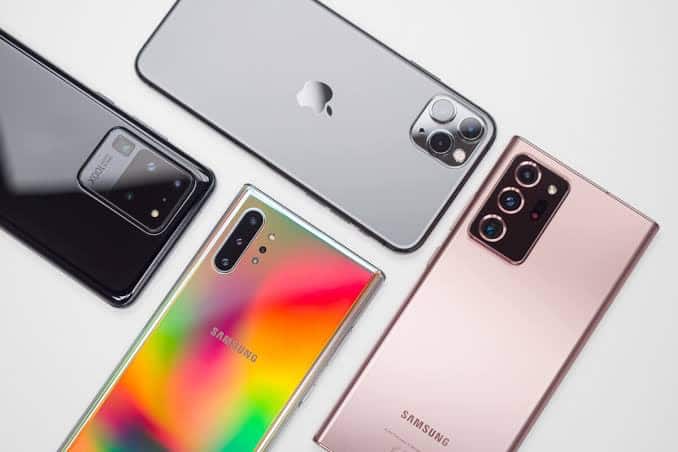 By the end of the year, we have seen various Premium smartphones launching throughout the year. Well, known brands have launched their own premium range of smartphones in India in 2020. Let us have a look at all the premium smartphones of different brands. Note: Tap on all the names of the phones to view details and the buying links are also provided there.

Apple iPhone 12 5G series is the most premium and most powerful iPhone ever. The series was launched in India a month ago and the starting price is from Rs.69,999 for the base variant of the Mini version and goes up to Rs.1,59,899 for the highest variant of the Pro Max version. This iPhone series will be the perfect choice for both class and power for an individual.

The Note 20 series has one 4G model and another 5G model.

Samsung Galaxy Note 20 series is the best android smartphone right now in the market. This premium flagship series has one of the best cameras and the display is very amazing. Any android smartphone are judged on the basis of its display, processor, cameras, storage, and battery with charging. All these properties are evenly balanced at the highest levels in the Galaxy Note 20 series. The series also comes with a S-pen that makes most of the daily tasks easier.

The FE is the latest addition in the series and is the most affordable among all.

Samsung Galaxy S20 series is the flagship smartphone series of 2020. Needless to say, the Samsung Galaxy S20 series has the most variants in the series than any other flagship series. The Fan Edition is the cheapest among the four variants and the Ultra variant being the costliest that comes with a 108MP camera sensor. The FE variant has the flagship vibe in a cheaper price tag.

After Apple and Samsung everyone looks up to OnePlus for its flawless and excellent flagship devices that deliver both power and style at a reasonable price range. The OnePlus 8 series has three variants this year and it comes with the Snapdragon 865 chipsets and excellent cameras.

Google Pixel 4a is the best phone from the brand itself this year. It includes all the Google facilities and it also gets Android version updates for a couple of years. According to us, this is one of the most over-priced smartphones this year. Though it does not come with any Android flagship features but has a price tag of a premium range smartphone.

ASUS ROG Phone 3 is the best gaming smartphone this year with a lot of accessories that can be attached to this for playing games. You can have the est gaming experience on this phone.

The Vivo X50 Pro is one of the best camera smartphones available in the market right now. It has a gimbal attached to the main camera sensor at the back that helps in a stable video shooting.

It is Oppo’s best flagship smartphone of the year and you can go for it for its amazing camera performance and display.

Another flagship smartphone from Oppo is remarkable for its performance, display and camera.

In this series there are two 5G phones and one 4G smartphone. All the phones are top of the line from Xiaomi. It is to be considered for its display, camera and performance. Also the price range of these devices are cheaper than other flagships.

Realme’s only 5G smartphone in India. The phone has an incredible charging speed and comes with the Snapdragon 865 chipset. It is worth buying because it is one of the cheapest 5G flagships in India.

Here are all the flagship phones of this year and we are ending the list with one of the most elegant looking smartphones of the year. Motorola’s Edge+ comes with a waterfall display which is pretty amazing.