How the Artist Limited Edition of Oppo Reno5 Pro+ changes colour of the back panel and what is the technology behind it? 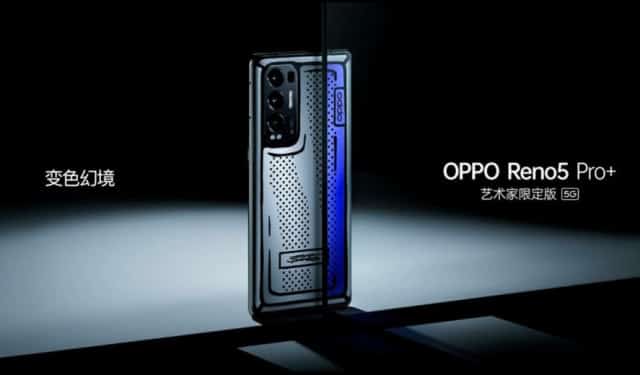 After a long wait, Oppo has launched its flagship Reno5 series recently. But yesterday the company has released the top model of this series the Oppo Reno5 Pro+. This top model of the Reno5 series has a primary sensor of 50 Megapixels with a Sony IMX766 lens, powered by Qualcomm’s Snapdragon 865 SoC, and more. Apart from this, the company will offer Reno5 Pro+ Artist Limited Edition, which will have a colour changing back panel.

Oppo has also launched the Artist Limited Edition for the Reno5 Pro+ model. This Artist Edition Reno5 Pro+ has a colour changing rear panel. A source reveals that the Chinese Giant Oppo has designed it in partnership with the designer Joshua Vides, he is a renowned graphic designer and also popular for creating daily objects in Monochromatic hand-drawn illustration.

How the colour of the back panel changes?

According to the official demo video, if you double-tap on the back panel of the Reno5 Pro+, then you can see that the colour of the panel will change. The colour will change between Silver and Blue- which is as same as the OnePlus 8T. Both phones have used the same technology. In the back glass panel, there is a thin layer of metal oxide. It changes colour based on the valence state of the metal ions inside.

What is the Technology behind it?

This phone will have the same features as the Standard version, but you can distinguish them based on the storage capacity. The standard version has 8GB RAM and 128GB internal storage, whereas the Artist Limited Edition will have 12GB RAM and 256 GB inbuilt storage configurations.

Regarding the price, as we all know the standard version of Reno5 Pro+ has a price tag of starting from RMB 3999 (approx. Rs.45,000) for the 8GB+128GB variant. The Artist Limited Edition of this phone will be priced at RMB 4499 (roughly Rs. 50,600). Interest buyers can pre-order this Limiterversion from 18th January, and this version will go on sale starting from 22nd January.

Taiwan sees a rise in its economy due to semiconductor demand