Realme Watch S Pro vs Amazfit GTS 2 vs Mi Watch Revolve: Which one should you buy? 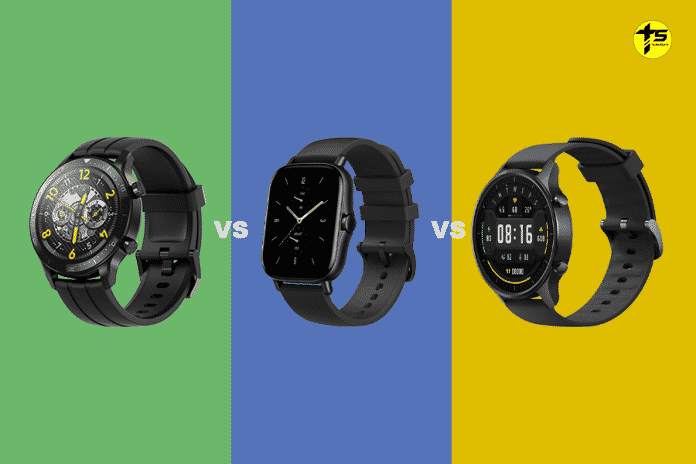 Multiple smartwatches have arrived in the Indian market this month. The list includes Amazfit GTR 2, Amazfit GTS 2, boAt Watch Enigma, and recently Realme Watch S series. In addition, the Amazfit GTS 2 Mini and Noise ColorFit Pro 3 are going to launch, another addition to the list. Among these, the boAt watch Enigma is the only entry-level smartwatch available in the market costs INR 2,999, the rest of the smartwatches i.e. second-generation GTS and GTR come from INR 9,999 to 14,999, other than the GTS 2 Mini, and obviously, we don’t know the pricing of the Noise ColorFit Pro 3.

If you are looking for a brand new smartwatch at around 10k and confused about which one to pick, here’s the comparison between the Realme Watch S Pro and Amazfit GTS 2. I know the GTS 2 costs around 3,000 more, but still, we need to figure out whether there is anything more or not. In addition, I’m adding the Mi Watch Revolve with these two as it’s also a tough competitor at Rs.9,999. So, let’s get started.

Now, hope you get a clear idea about all the specs of the three smartwatches from three different manufacturers. If you are a fan of big-screen watches with a square dial or addicted to music more, Amazfit GTS 2 is made for you. Though you need to pay Rs.3,000 more. If you are cot ok with it, you can either go with the Realme Watch S Pro or Mi Watch Revolve. Each of these two cost Rs.9,999. Buy links of all these three smartwatches are given below.