iQOO 7 Officially confirmed, a BMW Special Edition could be there: First-look suggests 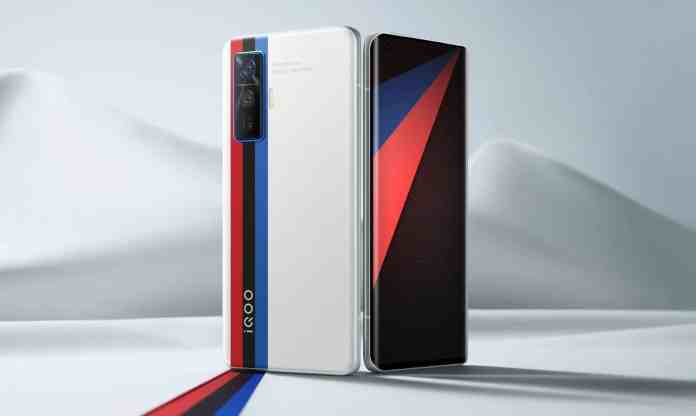 After the launch of the Snapdragon 888 chipset, Vivo has officially confirmed that it will definitely bring smartphones compatible with SD 888 next year. Recently, Vivo’s sub-brand iQOO has officially confirmed that it is going to launch iQOO 7, the next-gen flagship and it has revealed the first look of the device as well. As per the official look of this upcoming flagship shared by the company, the iQOO 7 is the official KPL game machine during the Autumn Finals 2020. It is not for the first time iQOO is collaborating with KPL. During the time of iQOO 3, the company had collaborated with KPL as well.

Another report has come out regarding the upcoming iQOO 7, it is going to be a BMW special edition (expected, no confirmation as of now from Vivo). From the leaked images, we can see the rear panel of the device has verticle tri-color BMW stripes of red, black, and blue on the right side of the panel. Also, this phone features a triple rear camera setup supported by an LED flash just beneath the housing. The rear camera module shapes rectangular and iQOO official branding is there on the module and the cameras are like the vertices of a triangle. All over, the camera module looks quite similar to the Vivo X50 or X60 series of smartphones. Earlier, Vivo had also collaborated with BMW Motorsport to launch a special edition of the iQOO 5 Pro.

Anyway, it is just a teaser from Vivo for its upcoming iQOO 7 flagship smartphone. As of now, the company has not confirmed its specifications as well as the pricing or availability. The iQOO 7 is expected to run on Android 11 OS and will be powered by the Snapdragon 888 SoC. This device is likely to have an AMOLED flat display and faster charging of 120W. The triple camera setup of this phone is expected to feature a primary sensor of 50MP and a punch-hole selfie snapper of 16MP.

Samsung Galaxy S21 vs Xiaomi Mi 11 vs iQOO 7: Which is the most powerful flagship device?