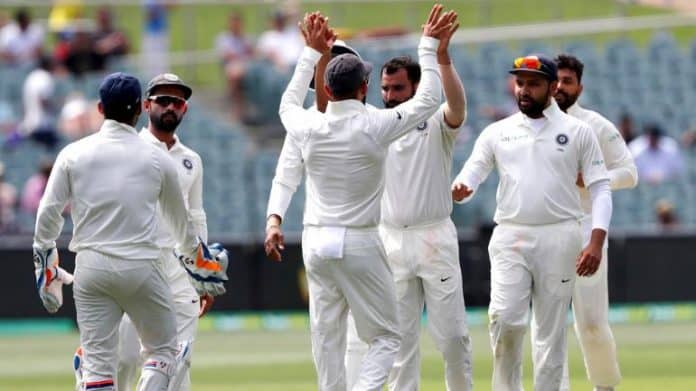 What an amazing performance it was from India on the second day of the 1st Test against Australia. The bowlers gave an incredible performance today as Australia got bowled for 191 in reply to India’s 244.

Fantastic bowling performance was shown by India, which was led by a heroic performance from Ashwin with a four-wicket haul. Adding to that Bumrah’s sending back, of both Australian openers added more confidence to others. Later on, Umesh Yadav took three more to pack Australia up for 191 as he bowled back of the length to send back dangerous Marnus Labuschagne and Pat Cummins. Mohammed Shami was also great with his length but was disappointed by the fielders as their performance on the second day was very poor with missing out on the catches.

“Going by what happened last time, the wicket becomes better to bat as the Test match goes on,” Ashwin said during a virtual media conference.

He also added that “I felt it played best for the batter on the fifth day last time. when we went into the Test match, we felt that we are in a similar sort of situation like last time”.

More, Ashwin added, “I think we made 250 last time and we were six runs shorter this time, so we knew that we are in the contest. We thought probably we put up a bowling performance that is a notch better than what we did last time,.

He was very happy to have dismissed Steve Smith which could yield good results in the final times of the match as he stated that, “Obviously it’s a big wicket, given his appetite for runs and the amount of time he bats, from that context of the match, it was a big wicket. Really happy.”

The Indian spinner further talked about comparisons with Australia’s Nathan Lyon and how different they are as he said, “I think every spinner is different and it can be blown out of context as to how one approaches his trade. Nathan and I, both bowled very differently and we are different bowlers and successful in our own ways. For me it’s not about trajectory so much, it’s about trying to have those change-ups and making it difficult for the batsmen to score”.

He further added, “If you are playing four bowlers, my job is to hold one end up and protect the fast bowlers and also go for wickets if I get enough assistance. So it becomes my job to make life difficult for the batsmen,” he said.

He praised pace head Jasprit Bumrah for going out and giving a bold performance against the Australian pace attack under lights. He quoted, “Jasprit is an extremely competitive cricketer. He likes to take the battle on ever since he has come into Test cricket.”

Prithvi Shaw today again failed as his defense was breached again before ending the day at 9/1, not only this, after the dinner break, Marnus Labuschagne scored 21 which was dropped by Shaw at square leg which was also a mistimed pull shot. But Bumrah’s batting in the final few minutes of the day completely stole the limelight as India took a crucial run-lead of 53.