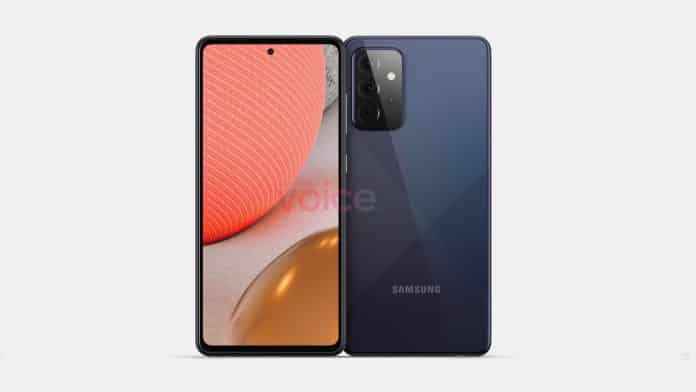 Samsung to launch another mid-range smartphone of its A series in the next year, named Samsung Galaxy A72 5G. Back in September this year, we’ve got a little news regarding this phone. Recently, a few CAD-based renders have been surfaced about this phone confirming that Galaxy A72 will feature a quad-rear camera setup. The predecessor of this phone, the Galaxy A71 5G was announced back in April. As per the design, there will be not much difference. Now, let’s talk about the specifications briefly about this upcoming smartphone.

As per the leaks and reports, the Galaxy A72 5G is expected to run One UI 3.0 based on the latest Android 11 OS and will be powered by a 5nm Exynos 1080 chipset. Regarding the display, this phone is likely to feature a 6.7-inch Super AMOLED panel with a resolution of 1080p. It will be a flat display and will have slim bezels all around. The Galaxy A72 5G will feature an in-display fingerprint scanner.

This phone will have a glasstic rear panel whereas the frame that goes around is aluminum. Looking at the basic design and size, there is a quite big similarity between the Galaxy A52 5G and Galaxy A72 5G. In terms of the camera section, this phone will feature a quad rear camera setup supported by an LED flash. For selfies, there is a small hole-punch at the top-middle part of the display.

Regarding the connectivity, this phone has the support of an audio jack at the bottom along with a USB-C port and a five-hole speaker grille as well. Coming to the dimension, this phone measures 165 x 77.4 x 8.1 mm and thickness goes up to 9.1 mm with the camera bump. Samsung has not confirmed anything about its pricing. But it is expected to carry a price tag of something around $599.