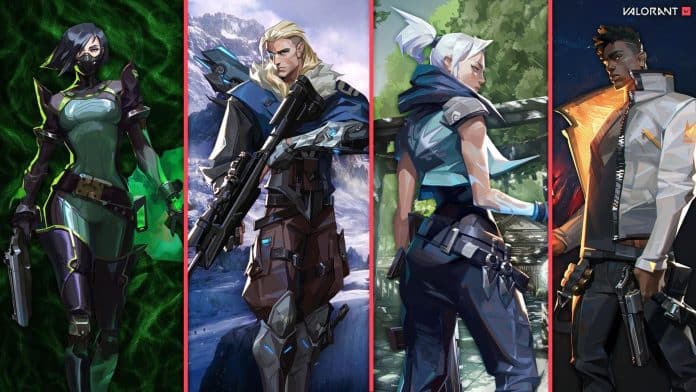 After a massive success of League of Legends, this year Riot Games has introduced its first FPS game ‘Valorant’ on 2nd June. The game already had gained popularity in its beta release. This game is a combination of aim and different abilities.

Initially, there were no Indian servers, Indian players had to play in Singapore server with around 100 ping, which was very difficult to compete with low ping players. But, finally, Riot came up with an Indian server in October along with the release of Act 3.

The players who are coming from a Rainbow Six Siege or Counter-Strike background, don’t have to worry about aim, the mechanism is nearly the same. But they need some time to familiarize with the agents with different abilities and role. Below, there are the top 5 tips to win a Valorant match.

There are 4 kinds of agent pool, which are Controller, Duelist, Initiator, and Sentinel. It’s a very bad practice if you are playing agents from only one agent pool. In comparison when you will learn one agent from more than one or two agent pools, your playstyle will be improved and in many scenarios, you will be aware of what the opponent character can do. The important point is if you are playing solo and your teammate already has selected the agent you play with, then you have to play with completely a new agent.

Now you’ll ask why not all agents. The simple answer is, with some specific agents you can play at your peak. For example, if you are playing as Omen and not much familiar with the agent, then you can not think so fast when and where to go with his ‘Shrouded Step’. But in the same scenario, a player regularly plays Omen, he can take a surprising position by teleporting instantly after hearing footsteps.

2. Understanding The Map and Timing

Till now Valorant has five playable maps, Bind, Split, Haven, Ascent, and recently added Icebox. Whether you are on the attacking or defending side, you never want to give away your position to the enemies. Know well, when to run and when to walk.

As an example, when on the attacking side check out the corners where a defender could wait for your kill. As a Sova, throw your recon bolt that if an enemy is hiding behind a box, he will get detected. If he spots any enemy then take an entry with the flashes of Breach or Phoenix and grab the site.

As a defender, place your traps in such places that an enemy will step in the trap and get detected, slow the attacking-team with the smokes at the entrance of a site, keep patient with your angel, stay concentrated about from where the enemy footsteps are coming. Don’t place your traps or bots in the same place in every round, discover different positions in the maps and surprise your enemies.

Frequently look at the timer. If your team is defending and the spike is dropped, play the time game, don’t get killed. Whereas in the attack, after planting the spike, for the next 45 seconds you need to keep away your enemies from the spike. Sova and Brimstone are here to secure the round from far away with their Ultimate without peeking at the enemy. It’s not necessary to always take a gunfight, play smart.

The minimap always plays a vital role in the game. When your teammate spots an enemy, you can see in the minimap and take an instant to peek from a different angle. The minimap also shows the friendly smokes and walls throughout the entire map. So, you don’t need to take a peek to see if the smoke is still there or not, you can place your next smoke by seeing in the minimap only.

Many a player doesn’t notice their footstep circle. If you look very carefully in the minimap, you’ll see a circle around you. This circle is the region, where an enemy can hear your footsteps. These are the small things that improve your gameplay.

You should always think about your team’s economy after every round. If you lose a round discuss with your team that, is everyone going for an ‘eco’ (playing with low-priced guns and without armor or low armor) round or not. By saving one round after lose, you can have a full buy in the next round, which will place you back on track. Otherwise, if your teammates think, that will be a crucial round if your team goes for an ‘eco’ and lose, then go for a force buy or a half buy.

Also, many a situation comes, when you are only left alive in a round and there remain no options to plant the spike or to enter into the site to defuse it. Then, you should leave the site and save your weapon, which will carry forward in the next round.

Valorant is not always about getting the most kills. You want to rush a round? Then ask your Reyna, Breach, or Phoenix to flash every corner and give a safe entry to the site. Your Sage has ultimate, then try to take some risky initial peeks, if you die, Sage has a second life for you. You haven’t got a kill on your first peek against a sniper? Call your Breach or Phoenix to flash and give you the position again for a first peek.

When the rest of your team gets into the site, stay outside the site with an unexpected position to cut-off the enemy rotation. Communicate with your team, give the perfect calls, don’t push one by one. At least keep one teammate with you, so if you die, he can take the trade.

Try to play combo abilities, like if you spot multiple players, call your sage to throw a slow orb and Raze there can use her ultimate to get multiple kills. You want to retake a site? Breach will use his ultimate to stun the attackers and give a call to your brimstone for a Steam Beacon, enter the site with a higher fire rate.

In every Act, Riot has a plan to bring new agents or new maps. The game is so addictive for an FPS lover. There are different kinds of game modes to get yourself prepared to compete with global players. Dive into the game, enjoy the game, and learn the game.