ISL 2020-21: SC East Bengal player Jacques Maghoma reflects about what went wrong in the previous matches and how can they make a comeback 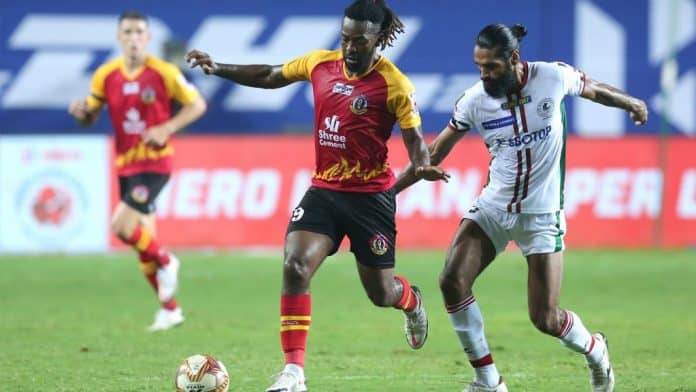 Kolkata giants, East Bengal brought on new investors on board in the form of Shree Cement in order to play in the Indian Super League. East Bengal changed their name to SC East Bengal and made their debut in ISL this season.

The hopes were high on such a legendary club. Many thought they would take to ISL as a duck to water but unfortunately, it has been the opposite. They have lost their first 3 matches and the most shocking part is they are yet to score their first goal in ISL. They have the largest goal difference of 7 among all the clubs in the league and are currently languishing at the bottom of the table.

Former Birmingham City player Jacques Maghoma who joined SC East Bengal this season has now reflected on what went wrong for them in the previous matches.

Maghoma said while speaking to SC East Bengal media: “I just feel that you need to focus on the next game and see where and how you can improve. As a senior player, I have to figure out in what better way I can contribute to the team. Of course, it’s also important to keep the spirits in the camp high. No one wants to be on the losing side. We need to change the atmosphere not only for us but for the fans as well. We need to stop thinking about the past results. The next game is going to be massively important for us and we’ll have to avoid making errors both defensively and offensively.”

SC East Bengal suffered a 2-0 defeat against NorthEast United on Saturday. The match was full of controversies as SCEB were denied two clear penalties. Maghoma was brought down inside the box in the 20th minute but the referee did not point towards the spot. Replays showed that it was a clear penalty. Again another appeal of a handball inside the box was ignored by the referee. Robbie Fowler went on to say that VAR should be implemented in ISL to avoid these referring errors.

Maghoma feels that if they were awarded the penalty, it could’ve “changed the course of the game”.

“That’s a tough one because I think everyone, not just people at the stadium but viewers watching the game on TV, could clearly see that it was a penalty and if given, it could’ve changed the course of the game. We started so well, dominated possession, but couldn’t capitalize on the chances. A penalty at that stage would’ve been massive for us. You can give the referee the benefit of the doubt. Maybe they made a mistake, but hopefully, they will correct it before the next game,” he said.

SC East Bengal will now face Jamshedpur FC on Thursday and will be looking for their first goal of ISL along with their first win. Maghoma said his side has a lot of quality and they are on the “right track” but just need to capitalize on the chances.

“It’s not going to be an easy game as no game in this tournament is supposed to be easy. Look, we have a lot of quality in the side; we just need to take our chances. We need to convert chances and defend well. I think that if we rectify a few errors here and there we’ll be fine and start winning those points. As I said, we don’t want to reflect on the previous result but penalties can be crucial in tight games. They defended really well and we’ve to give them credit for that. We’re on the right track. We just need to get bag some positive results,” Maghoma said.