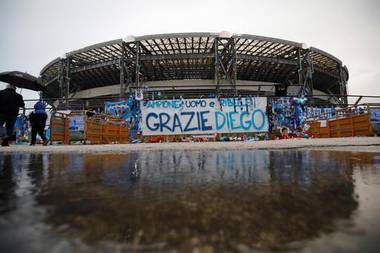 After Napoli legend Diego Armando Maradona passed away last week, the mayor of Naples, Luigi De Magistris suggested the rename of the Napoli stadium after the name of the legend. Yesterday, the city of Naples officially approved the rename in honor of Diego Maradona.

An official statement, published yesterday, revealed that the stadium changes its name from the ‘Stadio San Paolo’ to ‘Stadio Diego Armando Maradona’.

Diego Armando Maradona passed away on November 25 at the age of 60. Maradona has spent 7 years in Italy with Napoli wearing the legendary number 10 shirt and won Coppa Italia and a UEFA cup in 1989.

Luigi De Magistris Tweeted, “Diego Armando Maradona, the most immense footballer of all time, died. Diego made our people dream, he redeemed Naples with his genius. In 2017 he became our honorary citizen. Diego, Neapolitan, and Argentine, you gave us joy and happiness! Naples loves you!”

“Let’s name the San Paolo Stadium after Diego Armando Maradona !!!”- he said in another Tweet.

Naples city council said, “With his immense talent and his magic, he honored the Napoli shirt for seven years, giving it two historical championships and other prestigious cups, and receiving in exchange from the whole city an eternal and unconditional love.”

Napoli president Aurelio de Laurentiis told Sky in Italy, “I’ve been in talks with local authorities for the past 17 years, I’ve always asked to buy the stadium and rename it ‘Diego Armando Maradona.”

“If then, for tradition, we will need to call it both ‘San Paolo’ and ‘Maradona’ so be it. It won’t change much, but it’s only right that Maradona has this recognition. Even if we were to build a whole new stadium, I would name it like that.”

“Your years here remain indelible in the memories of the people of Naples — symbolic of a coveted redemption and yearned-for resurrection.”-he added.

Marseille complete the signing of Arek Milik from Napoli on loan