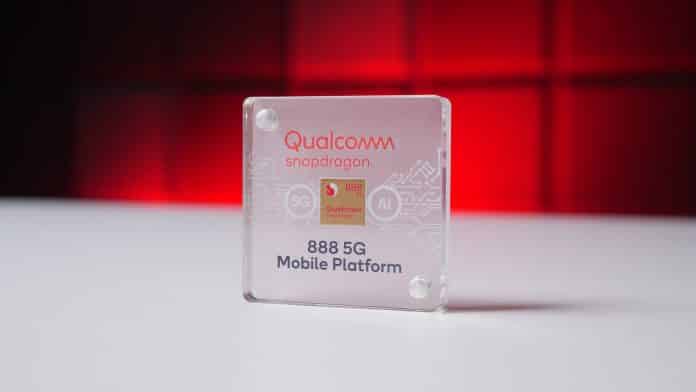 The Qualcomm Snapdragon Tech Summit 2020 is running and on the first day, the semiconductor manufacturer showcased its new addition to the Snapdragon 800 series. The company named it Snapdragon 888, instead of Snapdragon 875 that the maximum of us expected following the naming convention. Anyway, here are the other attractions of this new smartphone process that can excite you easily.

Earlier leaks and rumors suggested that the new 8 series extension would follow the earlier 1+3+4 core architecture like the predecessor. Though, still, there is no confirmation yet from the company but will surely reveal later. In the confirmed list, Qualcomm’s new X60 5G modem is there. It supports both the sub-6GHz and mm-Wave networks. Other 5G-related features such as both standalone and non-standalone network support, multiple SIM cards, and more.

The new AI Engine, inside the Snapdragon 888 can easily handle 26 trillion operations in a second (TOPS). This will reflect on the camera-centric features like AI-driven portrait mode, color correction, and so on. Due to the new NUP, OEMs now can easily optimize their on-device features including battery life, screen refresh rate, etc.

It is expected that this flagship SoC runs on the Adreno 660 GPU. The company claims its image signal processor (ISP) is now 35% faster than the earlier version.

The Xiaomi Mi 11 is likely to be the first smartphone that will step into the market with the Snapdragon 888 SoC. There is another confirmed name from Realme i.e. Realme Race. Other smartphone giants like OnePlus, ASUS, Oppo, Vivo, and more will come with their products powered by the Snapdragon 888 next year.