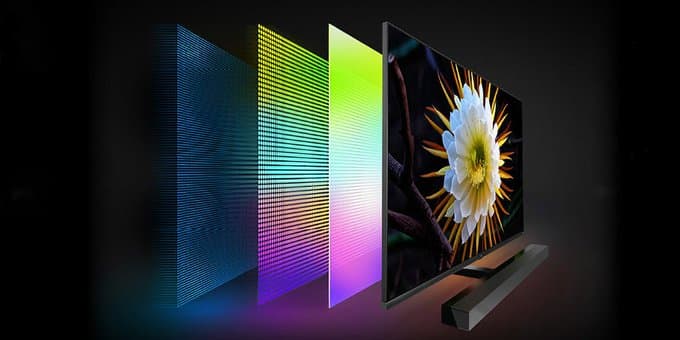 When we talk about displays (smartphones or smartwatches), the first name that comes to our minds is Samsung. This South-Korean tech giant is way ahead of other companies especially in terms of its tech display panels. The Super AMOLED display is a great example of it. Regarding it, a recent report has come out that Samsung has moved one step further on its QNED tech and is all ready to begin the trials of its newest QD-OLED display panels from the next month (December). These QD-OLED displays are called Q1. As per reports, it will produce 15,000 substrates per month initially and if things go well, it will then swing to its full 30,000 capacity.

The QD-OLED display is basically a hybrid version of OLED and QD (from QLED), it stands for a Quantum Dot-Organic Light Emitting Diode Display. This kind of display uses quantum dots which are basically semiconductor nanocrystals. It can produce pure monochromatic red, green, and blue light and they emit color whenever a light wave strikes them. For this, colors will be more dynamic (perfect contrast and brightness), blacks will be pure black.

Let’s talk about the difference between a QLED and an OLED display. QLED has an LED backlight, a layer of Quantum Dot film, and an LCD matrix. On the other hand, OLED displays do not have an LCD Matrix. Basically, it uses an OLED light source and a color filter to produce the images. QLED display also has a color filter. That’s why QD from QLED and OLED got combined and produced an improved display panel, QD-OLED.

As of now, the latest QD-OLED display is currently in the works. It is expected that it will take three to six months more to be used in other devices. We have all witnessed the craze for the super AMOLED displays of Samsung. Now it is the time for the QD-OLED display. It will be very interesting to see how it can compete with its other rivals on the battlefield.