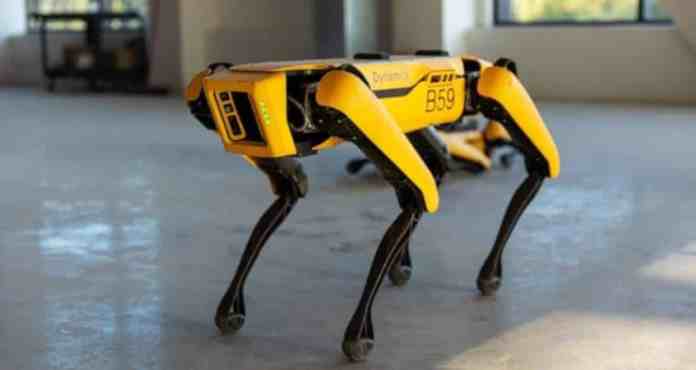 In several places like the Chernobyl Reactor 4, where a human being doesn’t want to go. In 1986, the reactor suffered a catastrophic meltdown. Now, it is covered up in every possible way to keep its nuclear core contained. But in the end, the nuclear material has to be dealt with anyhow and to do that it has to be understood which bits of it are very bad and which are worst. To help, here comes the ‘Spot’.

Within six months after the disaster, Reactor 4 was covered with a sarcophagus or shelter structure made of concrete and steel to keep all the nuclear power from leaking out. It still contains “30 tons of highly contaminated dust, 16 tons of uranium and plutonium, and 200 tons of radioactive lava.”

Now the Reactor 4 is inside the NSC (New Safe Confinement) structure. The structure will provide a safe containment from the left of the reactor. There is a better opportunity for the robot than a human being, to go inside the containment zone.

Megson-Smith, a researcher at the University of Bristol and part of Hot Robotics Facility at National Nuclear User Facility, said that “We actually built a map of the radiation coming out of the front wall of Chernobyl power plant as we were in there with it.” Also, he shared a picture, which has captured the gamma photon count rate coming out from a wall of the Chernobyl power plant.

It is a big challenge to make an incredibly radiation-proof robot, and there should be an extensive test to recover the failures. In Fukushima, there is a particular place, where robots go to die after failures, you can say a ‘robot graveyard’. He said, “So the thing they’re worried about with Spot is, what is its tolerance? What components will fail, and what can we do to harden it? We’re approaching Boston Dynamics at the moment to see if they’ll work with us to address some of those questions.”

Radiation mapping is the main target for the ‘Spot’. Chernobyl knows that their future is dependent on robots. “Ultimately, Chernobyl has to be taken apart and decommissioned. That’s the long-term plan for the facility. To do that, you first need to understand everything, which is where we come in with our sensor systems and robotic platforms,” Megson-Smith tells us. “Since there are entire swathes of the Chernobyl nuclear plant where people can’t go in, we’d need robots like Spot to do those environmental characterizations.”