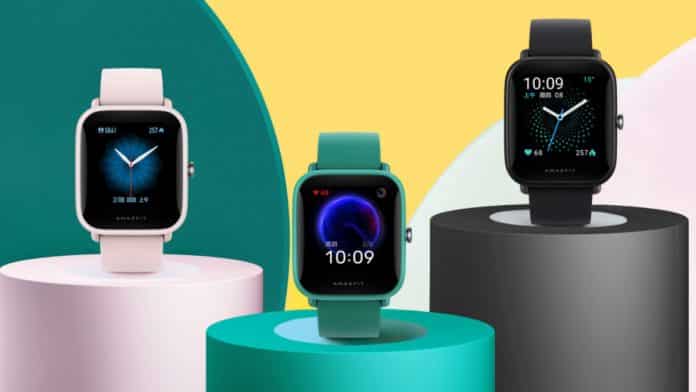 Amazfit Pop Pro Smartwatch is going to be launched on 1st December in China. A teaser has been revealed about the new wearable by Huami with some key specifications and the design. From the name, we can assume that it will be a premium variant of Amazfit Pop, which was launched the last month. There not much difference in design between the two variants, having the same square-shaped dial.

The teaser of this upcoming smartwatch was shared on Huami’s Weibo account, which validates the previous rumours and now it is confirmed that it will be launched on December 1, in China. This smartwatch features a square dial, having a colour touchscreen display, and a silicone strap. The key specification and features of the wearable are now known, you will get NFC support and also an inbuilt GPS support. The latter will prove to be the most important differentiator between the vanilla Amazfit Pop model and the upcoming Amazfit Pop Pro.

In the teaser, it is noticed that the Amazfit Pop Pro is weighed only 31 grams and offers PAI (Personal Activity Intelligence) index calculation, which gives a score based on, how much the user is active enough to achieve the maximum health benefit. The wearable is offering a 1.43-inch OLED display and has around 60 sports modes, including walking, running, and cycling. It also features 24×7 heart rate monitoring support and also has a microphone for voice commands.

All the detailed specifications will be revealed on December 1, along with availability details and pricing. It is expected that Amazfit Pop Pro will have a higher price tag than the Amazfit Pop, which has a price tag of CNY 349 (roughly Rs. 3,900) in China.

Amazfit Band 7 launched on Amazon India for an introductory price of ₹2,999