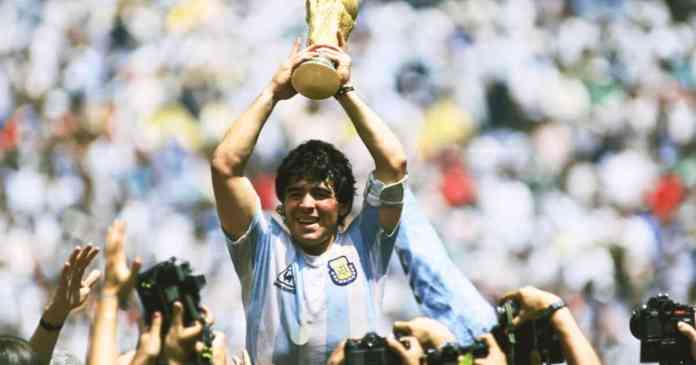 Fans all across the world have been left heartbroken due to the death of one of the greatest players in the history of football, Diego Armando Maradona. The Golden Boy was something special, and will forever be an inspiration to uncountable people from all walks of life.

Here, we remember the legend by having a look at some of the lesser-known facts about Diego Maradona.

He is the 5th highest scorer for Argentina

Behind Messi, Batistuta, Sergio Aguero and Crespo, Maradona is Argentina’s 5th highest goalscorer of all time, managing to find the back of the net 34 times in 90 games for the national team.

Maradona joined Barcelona from Boca Juniors for £5 million, a world record transfer fee at the time. Two years later, he joined Napoli for a fee of £6.9 million, smashing the transfer record once again.

Maradona’s “Hand of God” goal against England in the quarter-finals of the 1986 World Cup, which Argentina went on to lift, is one of the most infamous moments in the history of football.

His next thriller, the 60-metre dash from his own half which was later given the honour of the ‘goal of the century’, happened in the same match, four minutes apart.

That honour goes to the club that he started his playing career with, Argentinos Juniors. Their home stadium is called the Estadio Diego Armando Maradona and is a show of respect to their greatest prospect ever.

The European Cup, as it was called during the time, allowed only league winners from every nation to compete in the tournament. During his tenure at Napoli, Maradona led the club to their only two Scudettos till date and only managed to play in the tournament twice.

The two Argentinians are the only two players in the history of football to have ever won the Golden Ball in the Under-20 FIFA World Cup, as well as the FIFA World Cup itself.

He Has a Church Named After Himself

Even though Maradona starting the church himself would have not been much of a surprise, the “Church of Maradona” was established by the fans in Buenos Aires in 1998. The most surprising part, though, is the fact that years are marked by Maradona’s birthday every year.

He Has a Tattoo of Che Guevara and Fidel Castro

The Argentinian was good friends with Castro and has a tattoo of him on his left leg. Maradona cites Che Guevara as an inspiration, saying, “I carry him on my arm and in my heart. I learned his story, I learned to love him. I think I know the truth about him.”

Maradona Had His Own Talk Show

La Noche del 10 (The Night of the no. 10) began in 2005, and the first guest on the show was Maradona’s Brazilian rival Pele. The pair also managed to enjoy a game of head tennis during their time together on the show.

At the time, Maradona broke the world-record fee to join Napoli from Barcelona for £6.9 million. He went on to spend seven seasons in Naples and became the highest scorer for the club until his scoring record was broken by Dries Mertens and Hamsik. The number 10 shirt for the Partenopei was later retired in his honour.

Marseille complete the signing of Arek Milik from Napoli on loan