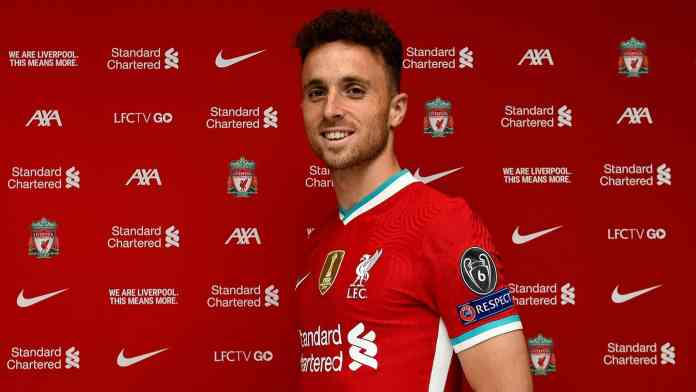 When the summer transfer window slammed shut, Thiago’s signing was heralded as the greatest piece of business done by Liverpool. While the Spaniard’s recruitment is no doubt a brilliant addition to the club, the midfielder himself has been missing in action.

On the other hand, Diogo Jota has been absolutely sensational since joining the reds. So much so that he has made the once-irreplaceable trio of Salah-Mane-Firmino look mortal.

Jota has scored 8 goals for Liverpool, including the Premier League and Champions League. He has also managed to become the first-ever Liverpool player to score in his first four home appearances for the club.

While his signing was not the most-talked-about during the summer, Jota has proven to be one of the best signings made by any club this season. It almost seems as if the Portuguese was born to play under Klopp, the way he fits in so well.

Jota managed to head in a slick cross by Robertson to beat Schmeichel and give the hosts a 2-0 lead in the first half. Roberto Firmino’s header from a corner saw the Champions bury the game 3-0 in their favour.

Jota came through the ranks at Pacos Ferreira in Portugal before joining Atletico Madrid. He was then signed by Wolves in 2017, initially on a loan deal, before permanently signing him a year later. He went on to feature 131 times for the Midlands club, scoring 44 and assisting 19.

The 23-year-old currently finds himself as one of the best players in the Premier League with Liverpool. Jota’s superb performance was key to sending Liverpool back to the top of the Premier League table, although they are behind Spurs via goal difference.

If the Portuguese forward manages to play as brilliantly as he has since the start of the season going forward, he will no doubtedly become vital for the Reds in their first title defense. For all we know, he might be a guaranteed starter by the end of the season!