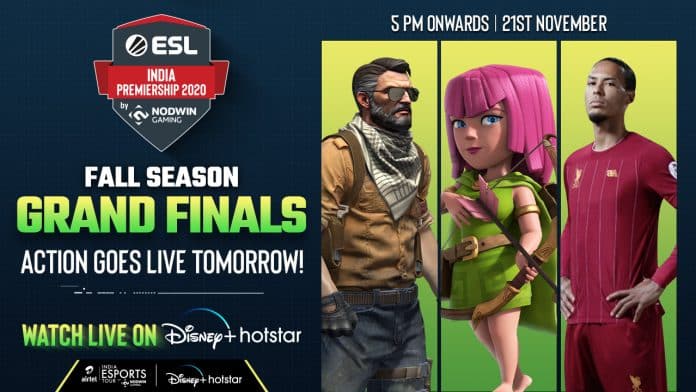 Finalists will compete for a prize pool of a whopping INR 34 Lakhs across 3 major esports titles!

New Delhi: November 21, 2020 – Two months after it launched the fifth edition of
the fall season of its front-running event — ESL India Premiership, NODWIN Gaming
is all set to stream the grand finale of the event from November 21-23, 2020 on
Disney+Hotstar.

The Fall Season went live on September 18, 2020 with tiles: CS:GO, FIFA20 and
Clash of Clans, following a very record-breaking summer edition that played out from
June to August.

“We’re really looking forward to the culmination of the fall season in a nail-biting play- off between some of India’s most aggressive, skilled, and talented esports athletes. You don’t want to miss watching our pros take this tournament to its ultimate fruition in the adrenaline-pumped grand finale,” said Akshat Rathee, Co-Founder and MD, NODWIN Gaming.

From November 21-22, fans across India will be able to watch their favorite players
and teams battle it out for the coveted prize pool of INR 34 Lakhs across all three titles. The annual ESL India Premiership has a whopping prize pool of ₹1.15
crore divided equally between the winners of its summer, fall, and winter seasons.
Here are the fall season finalists of the ESL India Premiership:

Players compete with each other on different aspects such as speed, tactical skills,
split-second precision and seamless coordination making the premiership an edge-
of-the-seat experience for both viewers and participants.