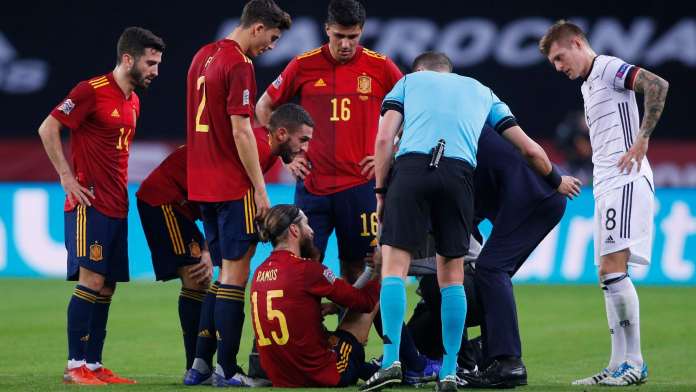 With the international break done with, Zinedine Zidane will have to deal with a fresh set of selection problems. Many notable names will be missing for Los Blancos owing to injuries, and to COVID-19.

Sergio Ramos was forced off with a hamstring injury in Spain’s 6-0 annihilation of Germany in the Nations League. He will be out for about two weeks and will miss today’s match against Villareal, the Champions League clash against Inter, as well as a home game against Alaves.

Despite being among the starting eleven alongside Nacho, Varane is most likely not 100% fit. He had a shoulder problem in France’s match against Sweden and had to be subbed off at half time.

Karim Benzema is still out with a muscle injury that he picked up in the defeat against Valencia. Luka Jovic has tested positive for COVID-19, and will be unavailable for selection in the upcoming weeks. Fede Valverde was in amazing form for Madrid, but is also injured and will be out for another couple of weeks at the very least.

Mariano Diaz, the only fit striker at the club, will be starting against Villareal and will probably lead the line against Inter as well.

On the brighter side of things, Carvajal, Hazard, Casemiro, Nacho and Eder Militao have tested negative for the coronavirus. Carvajal and Hazard start for Madrid against Villareal, and the latter three will be hoping to get involved for the La Liga champions in the upcoming fixtures.

The loss of Sergio Ramos is the heaviest blow dealt to the team, especially considering Madrid’s recent defensive problems.

Having the likes of Rodrygo, Marco Asensio and Vinicius among their ranks will help the club from the attacking side of things, but the absence of Benzema is bound to be felt unless the fit players can get the goals.

While Madrid currently find themselves at fourth place in the La Liga table, they sit in third place in their Champions League group behind Borussia Mönchengladbach and Shakhtar Donetsk. Both of whom have given Madrid a run for their money in the first two matches.

The 13-time Champions League winners will have to do everything right from here on out to avoid the drop to the Europa League. For a team of their stature, not making it through the group stages of the Champions League will be deemed as an absolute failure, and would be shameful to say the least.

The absence of Ramos, Benzema and a shaky defense is not making things any easier for Zinedine Zidane.

Share
Facebook
Twitter
Pinterest
WhatsApp
Linkedin
Previous articleWho is Ritwik Das, the 23-year-old winger who made his debut for Kerala Blasters in ISL?
Next articleMicrosoft Teams offers 24-hours of free video conferencing to compete against Zoom during

Manchester City are reportedly keeping tabs on Borussia Mönchengladbach midfielder Denis Zakaria to bolster their options in midfield. The Cityzens are currently out of...
Read more
Football

Hakan Calhanoglu is one of AC Milan's best players, and has been very involved in the club's goalscoring fortunes from the attacking midfield position.  The...
Read more
Football

David Alaba is nearing the end of his contract at Bayern, and as of now, there are no talks between Bayern and David for...
Read more
Football

The coronavirus pandemic has heavily impacted finances in football throughout Europe. However, Barcelona and Real Madrid are having arguably the most difficulty in dealing...
Read more

In a previous article, we have predicted that HMD Global is going to launch a new smartphone Nokia 5.4. Now to prove that assumption...
Read more
Apple

Apple is not only known for the manufacture of its devices but also for its customer services. The company, on every end, has uploaded...
Read more
Oppo

In a previous leak, we have revealed a few piece of information about the upcoming Oppo Reno5 series smartphones. Previously it has been reported...
Read more
Technology

In a fresh source of information, Microsoft's new device has been spotted on the Geekbench. The unnamed Surface Laptop was spotted with an 8-core,...
Read more
Load more

Hakan Calhanoglu is one of AC Milan's best players, and has been very involved in the club's goalscoring fortunes from the attacking midfield position.  The...
Read more