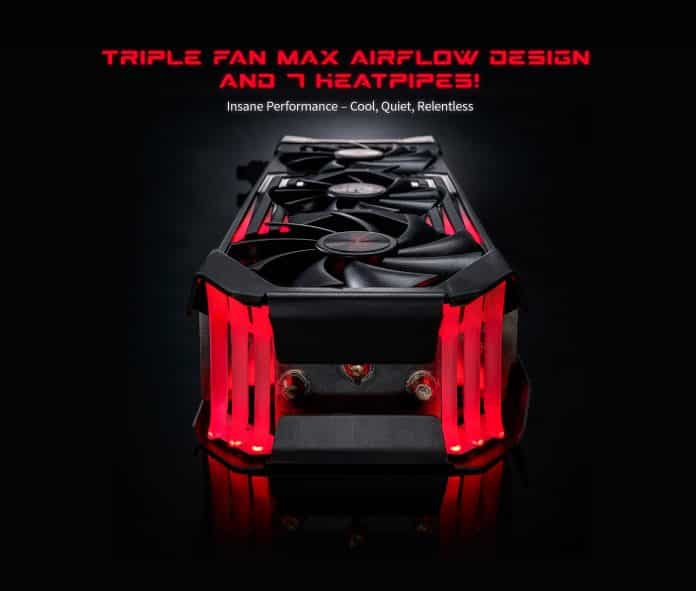 We have already seen Sapphire and MSI announcing their upcoming custom AMD graphics cards. Now, PowerColor has also joined the list. It recently unveiled its Radeon RX 6800 XT & RX 6800 Red Devil Custom graphics cards. Both come with a triple-slot and triple-fan cooling design. Each fan on the menu features nine fan blades, which direct air towards the internal heatsink assembly.

Both the front shroud and backplate are made using aluminium alloy metal that provides a premium aesthetic. The aluminium heatsink array comes with seven thick copper heat pipes, and they run through the heatsink to improve management. Exhaust vents on the backplate push air out and allow for optimal airflow.

The clock speeds of the Red Devil Radeon RX 6800 XT & RX 6800 series line are still not known, but it is rumoured that both the cards will utilize 14+2 phase VRM with DrMOS and high polymer caps along with dual 8-pin connectors.

The PowerColor Radeon RX 6800 XT & RX 6800 Red Devil include two DP, 1 HDMI, and a single USB Type-C port as its display outputs. According to sources, the Limited Edition variants of the Red Devil will feature Type-C ports, but the standard variants will not feature Type-C connectivity.

The company also states that a Liquid-cooled variant might be possible in the future. But the confirmation cannot be given when the company decides to launch it or even manufacture it. The Red Devil graphics cards are expected to launch about a week or two after 25th November. It will be found after the Radeon RX 6800 XT & RX 6800 series launch. Thus the pricing and specifications would be posted later on. So stay tuned.