Nokia 2.4 will arrive in India on 26th November 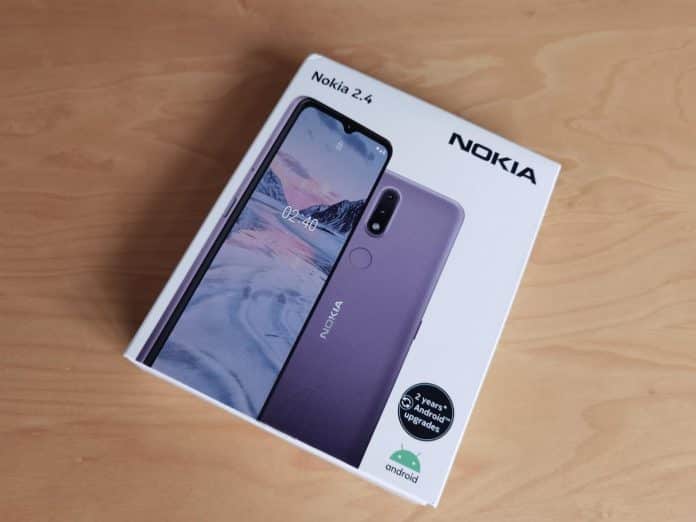 In a previous article, we have claimed that HMD Global is expected to launch Nokia 2.4 in the Indian market by the end of November. Now to prove that acclamation true the Nokia 2.4 will arrive in Indian marker on 26th November, and HMD Global has teased this news through its social media channels.

A 14-sec video has been posted by the Nokia Mobile tweeter account, which reveals the launch of the Nokia 2.4 handset. Also, we have got key specifications of this upcoming device, let’s check out these features.

Regarding the display, this phone features a large 6.5-inch HD+ LCD dew-drop notch panel with a 21:9 aspect ratio. The display also has (720×1,600) pixels of screen resolutions. This phone is available in three different color/shade variants: Charcoal, Dusk, and Fjord. The rear panel is made of polycarbonate.

The Nokia 2.4 runs on the Android 10 OS and is powered by the MediaTek Helio P22 chipset. The SoC of this phone is paired with 2GB/3GB of RAM and 32GB/64GB of internal storage (the storage is further expandable via an external microSD card).  The users can expand the internal capacity through a MicroSD card. This upcoming device is fueled up by a 4,500mAH battery (charges via MicroUSB port).

Coming to the camera part, the Nokia 2.4 offers a dual rear camera setup which includes a 13MP (wide) primary sensor with an f/2.2 lens and a 2MP depth sensor, supported by a LED flash. For the selfies, this phone has a 5MP selfie snapper with an f/2.4 lens at the front. This phone has a rear-mounted physical fingerprint scanner just below the rear camera module.

The phone will have dual-SIM (Nano) slot, which will be supported by a 4G network. Other connectivity options include- a 3.5mm headphone jack, single-band WiFi 5, Bluetooth 5.0, NFC, dedicated Google Assistant key, and many more.

Regarding the pricing and availability, there is no official confirmation regarding the price in India, but it is likely to be in line with its European pricing that starts at EUR 119(Roughly Rs. 10,500). The phone will be launched on 26th November in India.