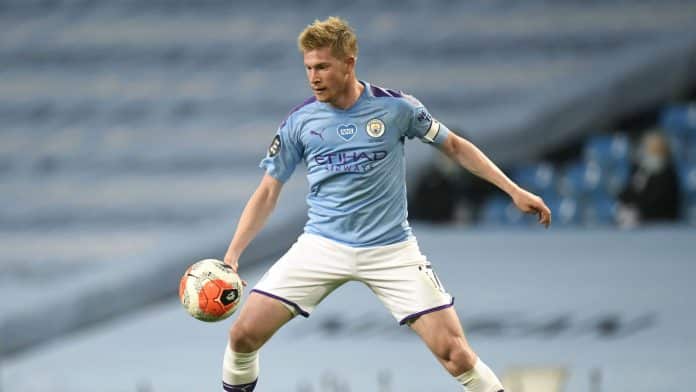 The rise of Belgian midfielder Kevin De Bruyne has coincided with the success that he has contributed to Manchester City’s domestic campaigns. He has over the years been an integral part to the Sky Blues’ midfield and now recently, emerged as part of the dressing room leadership group.

There has recently been speculation about his future with many clubs being linked with the footballer in the past, with the likes of Bayern Munich, Barcelona and Real Madrid courting him.

However, the 29-year-old midfielder has now stated that he is open to staying at Manchester City with an eye to securing a long-term contract. From his words, it does feel like he wants to go ahead and spend the best years of his career at City.

Speaking to VTM NIEUWS, De Bruyne is quoted as saying, “I am happy in Manchester. I am at a good club. Good owners. Good club. We are a bit in talks – not advanced. At the moment I am doing the talks myself. When you want to stay, it’s not so difficult.”

Kevin also has a well-settled family and recently also renovated his residential place, plus he shares good relationships with all his teammates at the club and as well as manager Pep Guardiola.

Although the Spanish coach’s future is now on the radar, the general consensus is that De Bruyne wants to stay with the team and lead them to further glory.

Kevin De Bruyne recently won the UEFA Midfielder of the Year and PFA Player of the Year accolades as part of his brilliant individual season which consisted of 13 goals and 20 assists in 35 Premier League appearances.

He also contributed in Europe with some immense displays, but eventually, the club has fallen short at the quarter-finals stage a few times now. However, City fans will be delighted at the fact that their best player could be staying for a few more years now.