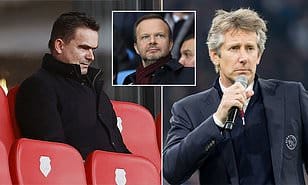 Manchester United executive vice-chairman Ed Woodward is searching for a person with a footballing brain, who can handle the transfer business for the Red Devils. Some sections of fans suggested former Manchester United goalkeeper Edwin Van Der Sar is perfect for the role.

But as per recent reports, Manchester United is also interested in former Arsenal winger Marc Overmars, who is the ‘Director of Football’ at Ajax presently. The rumor becomes more interesting after the comment of the former Dutch winger. Overmars said, “When I was appointed in this job at Ajax I knew I only wanted to stay for three or four years ­maximum.”

“I have been here eight seasons now! For me – but just as much for Edwin – it is sure that we are not going to carry on here until we are 60.”

“This job at Ajax is costing too much energy. The whole of the ­Netherlands is constantly on my back and has an opinion about us. The job has brought a lot of great things too. Edwin and I are proud that we have brought Ajax back where it should be in Europe.”- he added.

Manchester United have not won the Premier League since 2013 after the retirement of Sir Alex Ferguson. In these 7 years, they have spent more than £1 billion on new players and changed multiple managers but failed to bring the best out of the squad. Sometimes they failed to sign their prime targets and end up signing the optional ones.

It will be great to have either Edwin Van Der Sar or Marc Overmars as the ‘Director of Football’ at Manchester United after the work they have done at Ajax.