Team India rumored to play in ‘Retro Kit’ during the Australia tour! 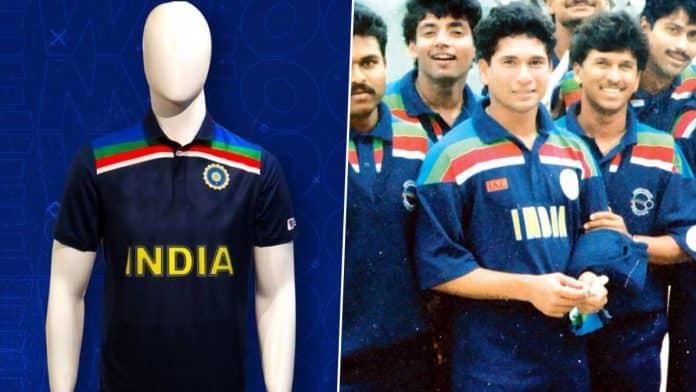 The Indian cricket fans are still in their IPL hangover as not finding any cricket on their TV sets at 7:30 PM has been challenging to deal with.

However, to their rescue, is an equally intense international series down under! The Indian team will finally be seen in blue colours post-IPL as they fly to Australia in November. Team India hasn’t been in action for a long time as a series against South Africa was cancelled due to circumstances arising out of the pandemic.

However, there’s a rumor floating around on social media that those blue colors might be reminiscent of a trip down memory lane. Team India is rumored to be donning the retro jersey from the 1992 World Cup. The news has had cricket fans on a nostalgia drive.

MPL signs as the Indian cricket team’s kit sponsor for the next three years!

The stars are aligning towards this rumor as BCCI has signed a deal with MPL to sponsor Team India’s kit for the next three years.

The BCCI and MPL have signed a three-year deal for team India’s kit sponsorship. The deal is from November 2020 to December 2023 and will see the board earn Rs 65 lakh per game over the three-year period.

Speaking to an Apex Council member of the board confirmed and explained the details of the new kit deal with MPL.

“Yes, we have signed a deal with MPL that is effective from November 2020 till December 2023. The kit sponsorship amount is Rs 65 lakh per match while merchandising is Rs 3 crore per year for the three-year period. With that royalty will be 10 percent of net sales per season,” the Apex Council member said.

India’s tour of Australia will begin on November 27 with the first ODI at the Sydney Cricket Ground. The majority of the players already flew to Australia directly from Dubai.