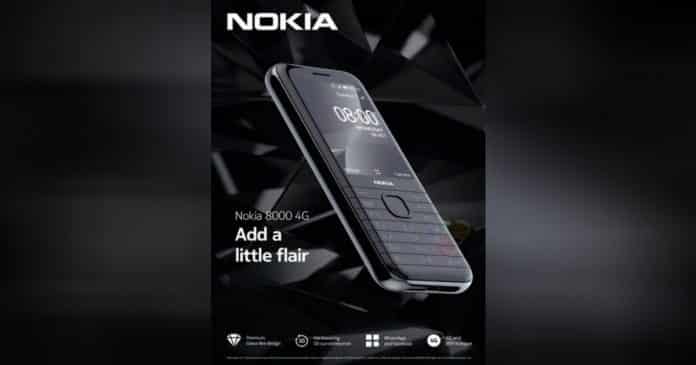 A new Nokia model named Nokia 8000 4G is in the making and recently we have got a leaked poster of this upcoming smartphone which surfaces the design details of it. This phone is not that kind of a proper smartphone, but we can’t say it a feature phone either. This phone is likely to be a revamped feature phone as per the poster image. No sliding mechanism will be there on this phone as the regular Nokia 8000 series. In place of the slider design, this phone has 3D curved edges and a curved keypad as well. You can see a premium glass-like design of Nokia 8000 4G in the poster image. Right now, we don’t have any confirmed information regarding the specs or pricing of this phone. So, let’s just check out what are specifications we can expect from this upcoming feature phone from Nokia.

Nokia 8000 4G is will run on the KaiOS and is expected to be powered by a Qualcomm Snapdragon 201 SoC chipset. In terms of display, this phone is likely to feature a 2.8-inch LCD (320 x 240 pixels) display. The SD 201 SoC of this phone is assumed to be paired with 512MB of RAM and 4GB of internal storage. The storage is further expandable up to 128GB via an external microSD card.

Coming to the battery, this phone is expected to be fueled up by an exchangeable 1,500 battery. Regarding the camera, this phone will feature a single rear camera having a 2-megapixel sensor. No selfie camera is there. In terms of connectivity, by its name, it is quite obvious that this phone will feature 4G connectivity. Other than the 4G, there will be the support of Wi-Fi hotspots as well. In that leaked image, Nokia 8000 4G is visible in a black color variant. But some other color variants are expected to be there as well. Regarding the dimension, this phone is expected to measure 132.2×56.5×12.3mm. As of now, that’s all we can expect from this upcoming phone. HMD Global has not confirmed anything about the phone so far.