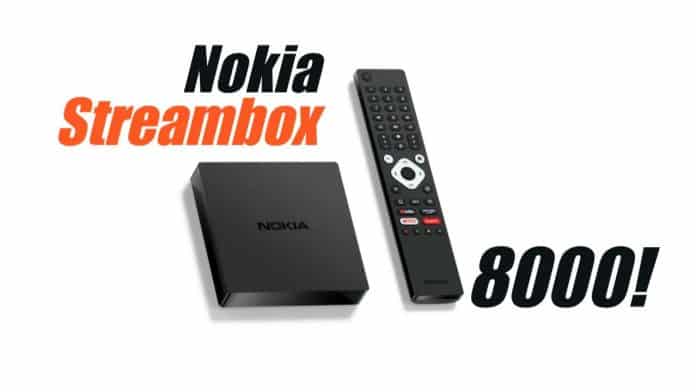 Nokia has launched a new Android TV-powered streaming box, named Nokia Streaming Box 8000. This device is capable of streaming 4K videos. It is developed by an Austrian company, named StreamView GmbH. This company has the license to use the Nokia brand name in certain regions of the globe, such as Europe, Africa, and the Middle East. Let’s checkout first its specifications & features and after that, the pricing.

In the retail box, you will get the streaming device and its remote. The highlight of the remote is the availability of hotkeys for Amazon Prime Video and Netflix in addition to YouTube and Google Play. All those apps have already pre-installed on the main device. In terms of video capabilities, it has already been mentioned that the device is capable of streaming 4K videos. As per the HDR format, this device supports a minimum of HDR10 format, if there is no Dolby Vision.

As per the other specifications, this device runs on Android 10 OS (TV version) and is powered by an Amlogic S905X3 processor. In terms of the ports, it has multiple ports for different purposes, such as an Ethernet port, HDMI, Digital Audio Out, AV Out, USB Type-A, and USB Type-C. A power adapter is there in the box as well by which the device will be powered up.

Regarding the pricing and availability, the Nokia Streaming Box 8000 carries a price tag of EUR 100 (approximately Rs. 8,800). This device will only be available in certain regions: Europe, Africa, and the Middle East. As of now, there is no news regarding the availability in the Indian market. But a similar type of product has been launched in India earlier this year, named the Nokia Media Streamer which is priced at Rs. 3,499.