Fede Valverde’s absence is going to give Zidane headaches 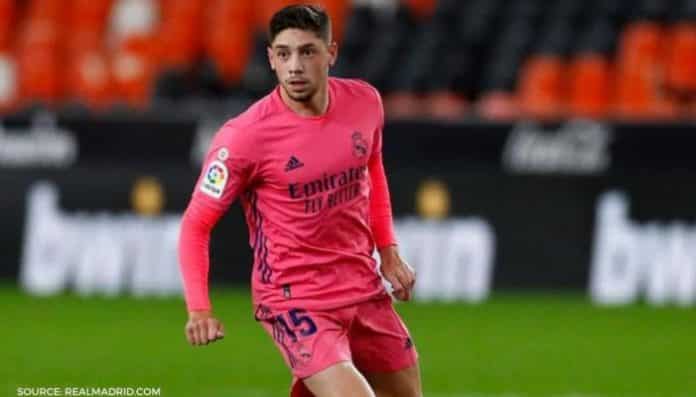 The game against Valencia was quite literally, an insult to injury for Real Madrid. More specifically, for midfielder Fede Valverde.

The Uruguayan was diagnosed with a fissure in the posterior tibial spine of the right leg on the back of the match at the Mestalla. The youngster posted on Twitter, hoping that the weeks pass by soon and that he is able to take to the field again.

The midfielder has been given the lion’s share of minutes when compared to all the three star-midfielders, Kroos, Casemiro and Modric.

The player has repaid his manager’s faith in him by putting up some stellar performances, whilst scoring three very important goals against Barcelona, Huesca and Real Betis.

Zidane will have to do without the Uruguayan’s services in the difficult matches against Villareal, Alaves and Sevilla in La Liga. In addition, he will also miss the Champions League clashes against Shakhtar and Inter.

Casemiro is currently recovering from Covid-19 and will be available after the international break. However, it is likely that Zidane will give minutes to Martin Odegaard for the Norwegian to prove his worth.

The wonderkid impressed in his spell at Real Sociedad and offers a different aspect to the game. While Valverde is more accustomed to a holding midfield role, Odegaard offers the attacking output that Real need as of now.

He could also put in the shift when Modric is having an off day, or as a regular should Zidane change his approach.

Zidane could also offer a chance to Isco to prove his worth in a Real Madrid shirt one more time. However, the Spaniard’s dismal performance and poor attitude along with the lack of minutes have probably signalled the end for the Spaniard at the Spanish capital.

Zidane could also offer minutes to 18-year-old Sergio Arribas or 20-year-old Marvin in the place of Valverde.