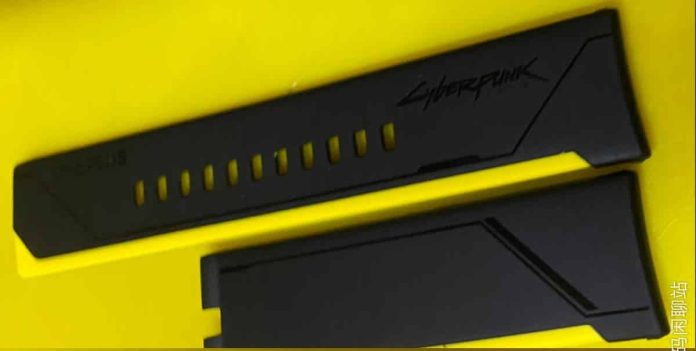 According to the leaked images of this upcoming watch, it is confirmed that this upcoming device will feature the Cyberpunk 2077 branded strap, which would be available with this limited edition watch.

According to the Chinese Weibo website, revealing that the upcoming OnePlus Watch features a Black Silicone wrist strap with yellow accents. The strap has both OnePlus and Cyberpunk branding, that’s why there is a little bit of confusion regarding the looks of this upcoming watch. But it is expected that this watch will get a unique look.

Regarding the other features, this upcoming watch may come with the latest Qualcomm’s watch chipset ‘Snapdragon Wear 4100’, which is an upgraded version of the previous ‘Snapdragon Wear 3100’. The watch will also feature a round-shaped dial design which is similar to the recently launched Vivo’s watch.

But, we haven’t got any other information about this upcoming watch. But it is expected that the company will disclose all the information regarding this device soon. According to the last official report, this wearable device would be further delayed. Initially, the company has claimed that the Watch would arrive by the end of October, but unfortunately, the watch’s announcement is on hold for the time being.

In a previous article, we have claimed that the South Korean giant Samsung is expected to launch a new smartphone- Samsung Galaxy M12. Now...
Read more
smartphone

In the upcoming 2021, many smartphone companies are expected to introduce their smartphones with the flagship 888G chipset. The Xiaomi Mi 11 is one...
Read more
Motorola

In a previous article, we have claimed that Motorola is expected to launch a new G series smartphone with the flagship Snapdragon 800 series...
Read more

Vivo V20 Pro 5G vs Moto G 5G vs OnePlus Nord 5G: Which is the Best and Cheapest 5G phone in India?

Motorola launched the Moto G 5G smartphone today in India and it is the most affordable 5G smartphone till now in the country. Previously...
Read more
One Plus

OnePlus has recently launched the OnePlus 8T and it is not even passed one month, the tech world has shifted its focus to the...
Read more
Technology

In recent weeks, OnePlus has brought updates for OnePlus Notes, OnePlus Weather, and OnePlus Gallery, which all has introduced the design of OxygenOS 11....
Read more
One Plus

Previously we have seen that a Geekbench listing revealed the core scores of one OnePlus device. The processor on that device is said to...
Read more