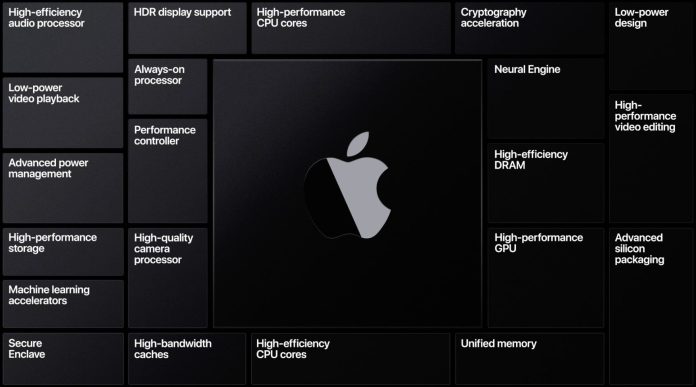 This month Apple will be hosting an event to mark the launch of their upcoming Macs powered by their own Silicon – preferably Apple A14X Bionic. This will be a huge leap in performance especially considering the fact it will be an ARM-powered chip based on the new 5nm process.

People are indeed excited to see what kind of performance Apple’s new SoCs can give and this is the reason why just before launch there’s a leak from CPU Monkey that gives a quick look to the CPU and GPU performance benchmarks of the latest Apple A14X Bionic chip.

Apple has gone way forward in developing faster SoCs for its devices, its ARM based processors are both efficient and powerful than many Intel CPUs out there. This is the reason why the Cupertino giant is shifting to its own silicon this time and the leaks suggests the new chip powering Macs could be 35% better in multi-core tests when compared to their current best A12Z Bionic chip.

As we see in the pic, the new A14X Bionic is almost comparable to its predecessor A12Z Bionic with 8 cores clocked at 1.8GHz base and 3.1GHz turbo, slight improvement from its predecessor. Well, Apple can certainly play with clock speed for various products and make them more powerful or less accordingly.

The integrated GPU seems to be upgraded again and the clock speeds of it remains the same as well, all of this in a 5nm die. There’s a bump in max displays supported as now 3 max displays can be attached along with 8GB RAM.

We have also got some benchmarks as well and in single-core tests we see the new Apple A14X Bionic scoring as much as 1634 points. This is a difference of 516 points which is almost 32% improvement over last generation.

In Geekbench 5 multi-core scores too, the new A14X Bionic scores a decent 7220 points that is almost 35% better performance over the A12Z Bionic.

In iGPU performance too we see an improvement of 26% as well, making this an all round improved SoC. As pointed out, CPU Monkey has good track record in leaking A12 Bionic and A13 Bionic benchmarks and they were also within the same range as actual real-life benchmarks.

Although all these numbers are still rumours but it is worth noting that the leaks still gives a fair enough idea about the improvement we can expect. Apple is all expected to launch the new ARM-powered MacBooks on November 10 at 10AM PST.

After the launch of the iPhone 12 series, DXOMARK has tested it in different aspects to check the overall performance of this newest series...
Read more
Apple

The U.S.- China scuffle that started all the way in 2018 has reached the point of calling it an all-out trade war between the...
Read more
Technology

Will India manage to win the third ODI or will the Aussies whitewash the series?

After India’s twin losses at the Sydney Cricket Ground, there is one match left for them to protect a tiny bit of their integrity....
Read more
smartphone

A piece of good news is coming out from Lenovo, as the company is going to start selling its Lemon smartphones in China. The...
Read more
Load more