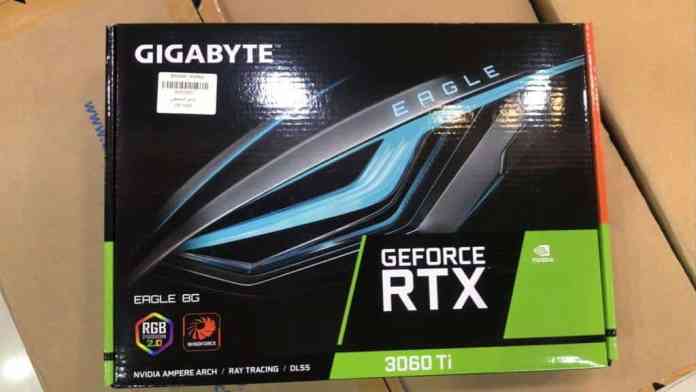 Nvidia’s upcoming RTX 3000 Ti series is on the verge of being unveiled, and we will soon get to see the much-awaited GPU from the graphics maker. With several leaks and rumors regarding the specs of the cards, anticipation high regarding the GPU. However, as we wait for the graphics card to be released, a Saudi Arabia retailer is already selling the RTX 3060 Ti graphics cards.

An alleged video appeared on the Facebook page of the retailer of the card being sold at the store. It is worth remembering that the GPU is supposed to be launched on December 2nd. Still, the Silicon Valley computer store is already selling the Gigabyte GeForce RTX 3060 Ti EAGLE OC. The alleged card is reportedly being sold for SAR 3,699, which is approximately $986. The selling rumors seemed accurate, but whether Gigabyte will sell the RTX 3060 Ti at the same price as its Saudi variant is highly doubtful.

But sources confirmed that the pictures posted by Silicon Valley computers are a fake picture of RTX 3060 Ti. According to the photos reveal by Silicon Valley, the custom cards will have a single 8-pin power connector. The menu will also feature four display outputs. The RTX 3000 cards are expected to offer 4,864 CUDA cores running on a GA104-200 GPU. The cards come with 152 Tensor cores, 38 RT cores, and 8 GB of GDDR6 VRAM. The RTX 3060 Ti will have a memory bandwidth of 256-bits and a TGP of between 180 W and 200 W.

The RTX 3060 Ti will be launched soon, and the rumors and specs about the cards are already making rounds. The launch date of the cards is said to be December 2nd this year; as to what will be the actual specs remains to be seen

Due to the pandemic, the world as we know it has changed drastically. With the world economy taking a major hit, the average consumer...
Read more
Mobile Accessories

The ongoing pandemic has brought about various changes in the consumer spending curve. With more people investing in smart devices, the demand for high-performing...
Read more

Finally, today, after having leaked completely already, NVIDIA has made their new RTX 3060 Ti available via a press release, and it kept the...
Read more
Technology

NVIDIA is already having a bad time in managing its stock of its new RTX 30-series GPUs, now in the mean time, when only...
Read more
Technology