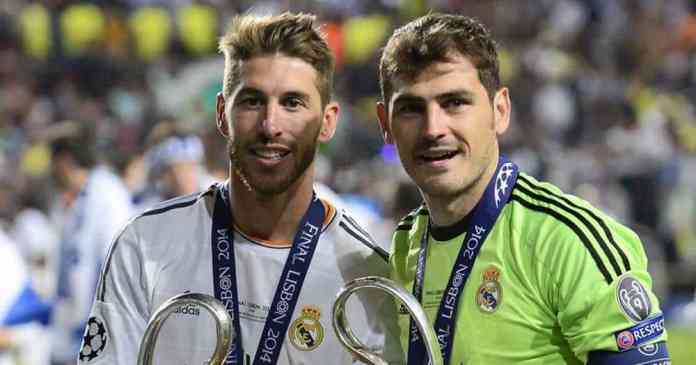 There have been some great players to grace the beautiful game over the course of history. But featuring in the top European competition and doing it year on year for a solitary club with the immense amount of loyalty and dedication, is something special.

Here we look at the six players who have spent the most amount of time with a single club and continued to appear in the Champions League time and again:

It has been a long time since Ramos moved from Sevilla in the 2005/06 season. And ever since then, he has been a mainstay in the Real Madrid defence often even earning the tag of ‘Captain Fantastic’. The current Champions League season is in fact his 16th, and he looks commanding as ever despite the team faltering a little. Ramos has 4 Champions League trophies in his time with the Los Blancos and has also won the UEFA Defender Of The Year on a few occasions.

Unquestionably, Casillas is one of the best goalkeepers of this generation. Many Madrid fans will tell you that he was a loyal servant who represented a defiant defensive wall, and was crucial in the success of the club as well as his nation Spain. He made a representation in Madrid’s 150 games across all European competitions and has even won the coveted Champions League title three times in his career.

Part of Barcelona’s gem of a midfield which consisted of generational talents, Xavi was right at the heart of whatever the Catalan club did, often pulling the strings in the middle of the park. The Spanish midfielder really peaked alongside Iniesta and Busquets, under Pep Guardiola’s reign during the late 2000s. Xavi also won the Champions League trophy four times in his career under three different managers – Rijkaard, Guardiola and Luis Enrique.

An academy product who spent his entire career playing as a one-club man, Paul Scholes was truly one of the best midfielders Manchester United ever produced. He was part of the Red Devils’ instrumental runs in the Champions League and struck fear in opponents who faced them. Scholes made a total of 134 appearances in European competitions and the won the “Big Ears” trophy twice in his time with United.

The Argentine superstar much like a handful of few people has spent all his life with one club, in this case, FC Barcelona. Since joining the first-team as a young boy in the 2004/05 season, Messi has only emerged into an absolute powerhouse. He has won the Champions League four times now and has been very keen to land a fifth. But regardless, he is only second to Cristiano Ronaldo in the premier European competition, scoring 117 goals across 145 matches.

One of the more influential wingers, Welsh descent Ryan Giggs had tremendous endurance and stamina levels to keep performing for Manchester for a long, long time. Coming from the rival club academy of Manchester City, Giggs went onto become a club legend at United and was credited for his brilliant trickery, dribbling and had a special eye for goal. Giggs, much like Scholes, also spent his time at just the one club and won the Champions League trophy twice in 1999 and 2008.

The Indian Super League official website has declared their Team of The Week for Gameweek 2. Players picked for this purpose have provided no...
Read more
Football

AC Milan have made a tremendous start to the season, sitting on top of the Serie A league table with 20 points from their...
Read more

Barcelona drop Messi bombshell, and rumours for PSG move in 2021

“Economically speaking, last summer I would have sold Messi. It would have been desirable. For what you enter and for what you save," confessed...
Read more
Football

Manchester United hosted Paris Saint-Germain in the matchday 5 of UEFA Champions League. United won the first meeting between the two in the group...
Read more
Football

UEFA Champions League is surely one of the most exciting competitions for football fans. Top teams from all over Europe fight for European glory...
Read more
Football

Arguably the greatest ever player to grace the football field, Diego Maradona passed away on 25th November. It will be remembered as one of...
Read more

Since moving to Bayern Munich from Schalke in 2018 for free, Leon Goretzka has managed to establish himself as one of the best midfielders...
Read more
Nokia

HMD Global (the company behind the Nokia smartphones) is about to launch a budget smartphone in China with model number TA-1335. This smartphone also...
Read more
Technology

AMD had an amazing 2020 with its Ryzen 4000U mobile processors and their revolutionary RDNA 2 graphics powering the next-gen consoles. Its new Ryzen...
Read more
smartphone

Back in June this year, Vivo had launched the X50 series in China. This X50 series has two smartphones. Now as per the recent...
Read more
Football

Ever since breaking onto the European football scene in RB Leipzig's progression to the semi-finals of the Champions League last season, Dayot Upamecano has...
Read more
Load more

Since moving to Bayern Munich from Schalke in 2018 for free, Leon Goretzka has managed to establish himself as one of the best midfielders...
Read more

Ever since breaking onto the European football scene in RB Leipzig's progression to the semi-finals of the Champions League last season, Dayot Upamecano has...
Read more

Ravindra Jadeja ruled out of Australia series due to concussion, could be a major setback for India

On December 4th 2020, in the final over of the first innings of the first T20I in Canberra against Australia, Ravindra Jadeja sustained a...
Read more