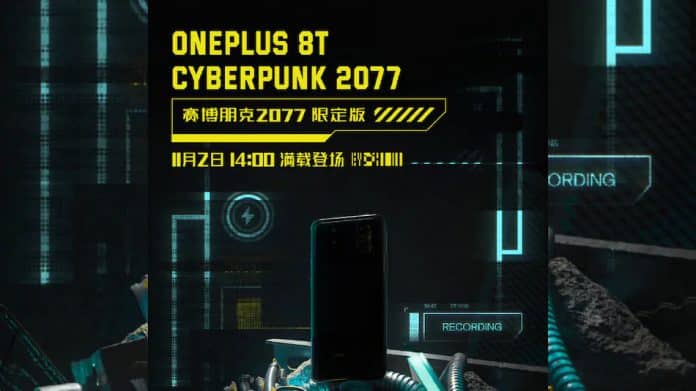 As per the reports, after the launch of the regular edition of the OnePlus 8T, the company is all set to launch the OnePlus 8T Cyberpunk 2077 Limited Edition on November 2 this year. The Cyberpunk 2077 is nothing but an upcoming action role-playing video game that is scheduled to get launched on December 10, 2020.

So, OnePlus has just signed a partnership with the video game developer company CD Projekt for this combined limited edition OnePlus 8T. It is basically a combined version of the OnePlus 8T and the Cyberpunk 2077 gaming theme. But it is not quite confirmed whether this special edition would get launched in the Indian market or not.

In this special edition, only the outer design of the OnePlus 8T is going to be changed. But the internal specifications are expected to be identical to the regular version of the OnePlus 8T. So, let’s recall them one more time. The OnePlus 8T Cyberpunk 2077 Limited Edition may run the OxygenOS 11, which is based on the Android 11 OS and may be powered by an octa-core Qualcomm Snapdragon 865 SoC chipset.

This phone is expected to offer a 6.55-inch Full HD+ (2400 x 1080 pixels) AMOLED hole-punch display with a refresh rate of 120Hz. This Cyberpunk 2077 Limited Edition of the OnePlus 8T has been teased about having yellow and grey accents.

In this edition, the Snapdragon 865 SoC is expected to be paired with only 12GB RAM/256GB storage variant. In terms of camera, this phone is about to come with a quad rear camera setup which includes a 48MP (f/1.75) primary sensor, a 16MP (f/2.2) ultra-wide sensor, a 2MP Monochromatic, and a 5MP macro sensor (supported by dual-LED flash). For the selfies, this phone offers a 16MP (f/2.4) selfie shooter at the front, inside the hole-punch.

Regarding the battery, this phone is fueled by a 4,500mAH battery with the support of a massive 65W warp charging through a USB-C. Apart from it, this phone has every other connectivity option, like 5G, Bluetooth 5.0, 4G LTE, Wi-Fi, and USB Type-C port for charging.