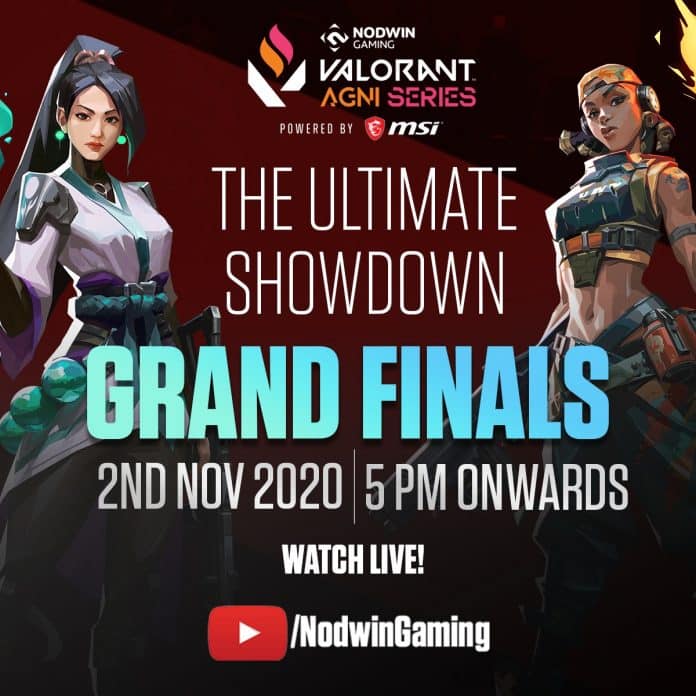 Grand Prize pool of a whopping INR 4.25 Lakhs on the line

New Delhi: October 31, 2020 – NODWIN Gaming’s first-ever Valorant tournament titled NODWIN Valorant Agni Series 2020 that went live on its YouTube Channel on August 21, 2020, is now in its last leg. The grand finale of the series will be streamed live on 2nd November at 5 PM on NODWIN’s YouTube channel. Professional players, along with aspiring amateurs battled through four qualifying rounds for a grand prize pool of INR 4.25 lakhs.

The winners of the four qualifiers that have reached the finale are:

Teams will play Best-of-3 semi-finals and a grand finale to win the crown of Agni Series.

“The community has been waiting for a big opening of Valorant ever since the game became a global rage and we’re happy to report that we have done that in style, with Agni Series. The overwhelming response to the tournament is an indicator of how Valorant will be placed in the Indian esports ecosystem in the future. All the very best to the qualified teams!” said Akshat Rathee, Co-Founder and MD, NODWIN Gaming.

The Valorant Agni Series has been a much-loved tournament for the esports community across the country, especially with all the top teams and star players. NODWIN Gaming brought the Valorant series to India in order to make the high-octane live action available to the Indian fans. The winners of this series will earn the right to call themselves the first Valorant Agni Series champions of India.

NODWIN Gaming, South Asia’s leading esports company, is an independent subsidiary of the mobile gaming company Nazara Technologies. Formed in 2015, the India-based company has since produced over 10,000 hours of gaming content, has been watched by over 100 million+ viewers, and organized 100+ gaming and esports events.

Through its strategic partnerships with global publishers and partners, including ESL, Valve, and Blizzard, NODWIN Gaming has introduced Indians to some of the best global experiences such as DreamHack, The India esports Premiership, Gaming merchandise, Gaming influencer management services.

NODWIN actively works with media broadcasters on offering Media Rights for its national and global properties for broadcast.

NODWIN Gaming builds and operates its own esports IPs and currently operates in India, the Middle East, and South Africa.