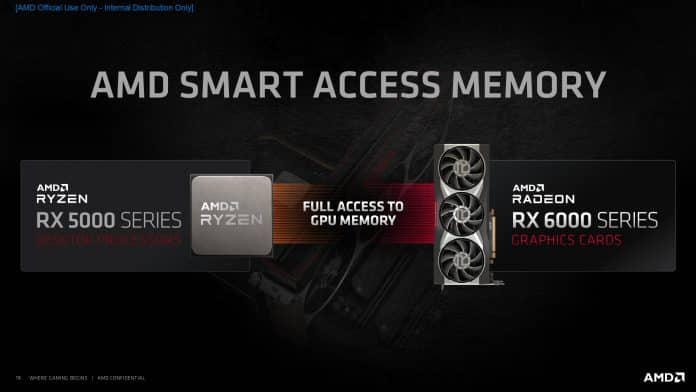 Recently, AMD announced its new revolutionary Radeon RX 6000 GPUs based on the new RDNA 2 architecture. These top-of-the-line graphics cards sum up against NVIDIA’s flagship GPUs and performs head-to-head as per AMD’s slides in the presentation.

However, in the total launch event, one new feature that surely has excited you is the new AMD Smart Access Memory that is completely new concept that only AMD could have thought and implemented. AMD’s new high-end Ryzen 5000 series desktop processors and the new Radeon RX 6000 series GPUs can be combined to give the best performance.

Obviously, both of its new products have improved considerably from their last-gen, where new Ryzen 5000 processors gaining almost 26% gaming performance whereas the new RDNA 2 based GPUs having over 50% generational uplift in graphical performance. When combined together, according to AMD, you can experience the best gaming frame rates and performance.

AMD’s Ryzen and Radeon units have several common points and in terms of memory it is the new PCIe gen 4 support and now the new AMD Infinity cache, similar to the Infinity Fabric used to connect the dies in a Ryzen chip. Now when combined on a 500 series motherboard, AMD promises performance gains at no extra costs.

With new AMD Smart Access Memory Technology, you can expect as much as up to 11% extra performance in select titles. If you ask how this works? AMD says in a conventional Windows 10 PC, processors can only access a fraction of graphics memory (VRAM) at once, limiting system performance.

Whereas, with AMD Smart Access Memory (Ryzen+Radeon combo), the data channel gets expanded to harness the full potential of GPU memory – removing the bottleneck to increase performance. Obviously, in AMD optimized games, you’ll experience this feature to be best implemented, still great bonus for gamers truly.