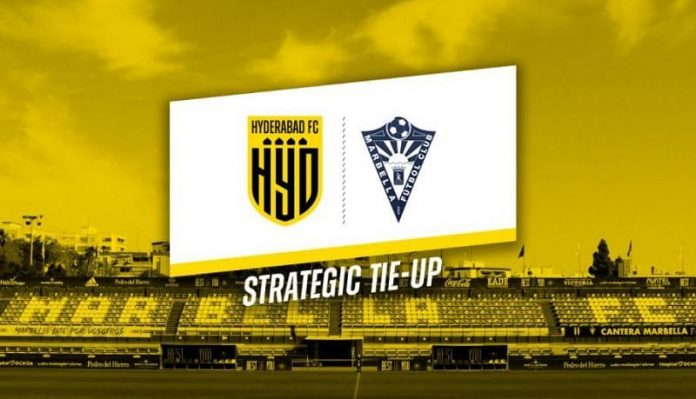 Marbella FC plays in Segunda División B [Second Division League in Spain]. They miss the promotion by a very narrow margin last season.

Hyderabad FC and Marbella FC have agreed on a 3-year deal. In this time, Hyderabad FC’s first team players can use the infrastructure of Marbella FC and their medical facility as well.

Varun Tripuraneni, the co-owner of Hyderabad FC said, “Marbella FC has one of the top infrastructure facilities in not just Spain, but entire Europe. This strategic tie-up allows us to explore a lot of opportunities that will help Hyderabad FC on the technical side of the game. For starters, the top young players in our first and reserve team will head to Marbella for an extended training period, once travel opens up.”

“The facilities and infrastructure will offer a great level of exposure for our players and the idea is to provide medium to long-term training experience and not just a short camp.”, he added.

Marbella FC General Manager Héctor Morales was also delighted with the tie-up. He said, “This alliance with Hyderabad FC is a source of pride for Marbella FC. It will allow us to be in contact with one of the most important clubs from an emerging football market. We are convinced that this alliance will bring great benefits to both clubs. We are already working with Hyderabad FC to start this new adventure together as soon as possible.”

The journey of Hyderabad FC has not gone well last season. But they surely want to fight for the title this season. Indian football is growing rapidly. The interest of big clubs in the world to invest in this country will surely help in the growth.