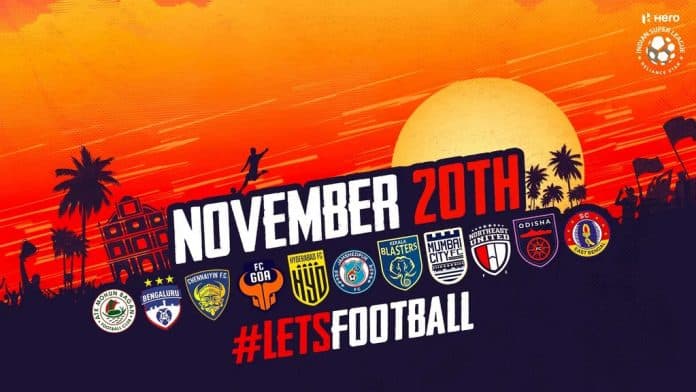 ISL will be of 11 teams from this season. All the matches will be played in Goa behind closed doors in three different venues. The venues are JL Nehru Stadium (Fatorda), GMC Stadium (Bambolim), and Tilak Maidan (Vasco). Teams are already staying in Goa for their individual training camp.

ISL is going to be the first major official tournament after the COVID-19 pandemic. The inauguration match will be played between Kerala Blasters FC and defending campion ATK Mohun Bagan FC [Formerly known as ATK] on 20th November at GMC Stadium Bambolim. The kick-off time will be 7:30 pm.

The rules and format will be the same as last season. All 11 teams will be playing against each other in a double round-robin format. Last season there was a total of 95 matches. This season it will be 115 matches.

The addition of the Kolkata giant SC East Bengal and ATK Mohun Bagan [Mohun Bagan merged with ATK] will surely be a treat to watch for the football fans. All the football fans are very much excited to taste the beauty of one of the oldest rivalry in Asian football.

Moreover, SC East Bengal fans are waiting for 27th November, as their beloved club will begin their ISL journey on that day with a derby against ATK Mohun Bagan FC.

Football is finally back in India. Indian football fans are ready to scream ‘Let’s Football’ once again.