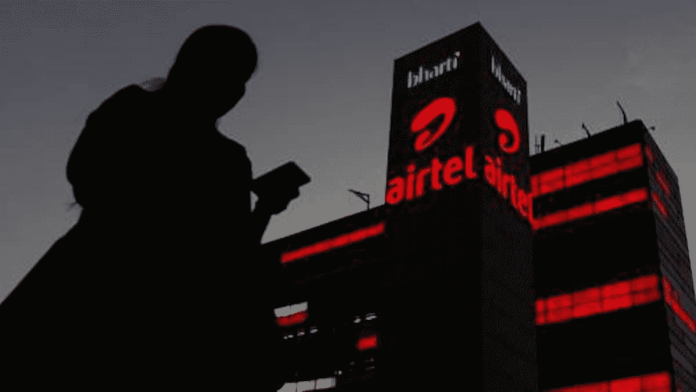 India’s second-largest telecom operator, Bharati Airtel Ltd. declares its highest-ever quarterly gained revenue this Tuesday. This high revenue during the Q3 of this year is driven by huge traffics and a hike in regular data usage for remote working and all.

The earlier Indian telecom operators were disrupted a few years ago when Reliance Jio entered into this field. Later, last year all the service providers increase their charges as they were ordered to pay ₹92,000 crores to the government.

The telecom operator, in a stock exchange filing, said, “Total minutes of usage on the network during the quarter were 952 billion, representing a growth of 20.5% as compared to 790 billion in the corresponding quarter last year. Mobile data traffic grew 58.8% to 7,949 billion MBs during the quarter as compared to 5,005 billion MBs in the corresponding quarter last year,”

In the case of Adjusted Gross Revenue (AGR) dues, Bharati Airtel said that it already cleared over 10% of the total due amount as demanded by the Telecom Department and also ensures to obey the Supreme Court’s order.

The recent technological innovations have made life much simpler for the people over the years. The world of AI, IoT and the plethora of...
Read more
News

43 more Chinese applications get banned in India, here is the list

The Indian Government strikes again against Chinese applications. Now, a group of 43 applications gets banned this Tuesday under section 69A of the Information...
Read more

Airtel and Reliance Jio leads the telecom market of India and is very active in terms of launching internet packs. No other company seems...
Read more
News

Consumers are attracted to web series more than movies these days. For those who are still fans of some movies or want to watch...
Read more
News

During this global pandemic, as maximum of us are stuck in our home internet consumption along with the over the call conversation hiked on...
Read more
Application

During this global pandemic, almost the sports lovers were disappointed as all the scheduled events were canceled to prevent gathering. As the days went...
Read more

The recent technological innovations have made life much simpler for the people over the years. The world of AI, IoT and the plethora of...
Read more
Football

FIFA have officially released the nominees for the various categories of awards that will be given out at The Best FIFA Football Awards ceremony...
Read more
Football

The 25th of November, 2020 will be remembered as one of the saddest days in footballing history. One of the greatest players to ever...
Read more
Gaming

If you have been playing FIFA 21 for quite some time now, you might have faced a lot of issues during the play as there were...
Read more
News

Google recently introduced a major update of its Google Fit. No doubt, that will help users to analyze their activity details more easily. Now,...
Read more

43 more Chinese applications get banned in India, here is the list

The Indian Government strikes again against Chinese applications. Now, a group of 43 applications gets banned this Tuesday under section 69A of the Information...
Read more

Nikon plans to cut 10% of its workforce

The coronavirus pandemic has hit the world economy in a tough way. If we talk about the average consumer spending, then the curve has...
Read more

Reliance Retail’s ‘Vocal for Local’ Mission Expands to 30,000 Artisans and over 40,000 Artisanal Products

The company’s 'Indie by AJIO' and 'Swadesh' initiatives offered over 40,000 artisanal products this Diwali across its retail formats Mumbai, November 23, 2020: In a...
Read more