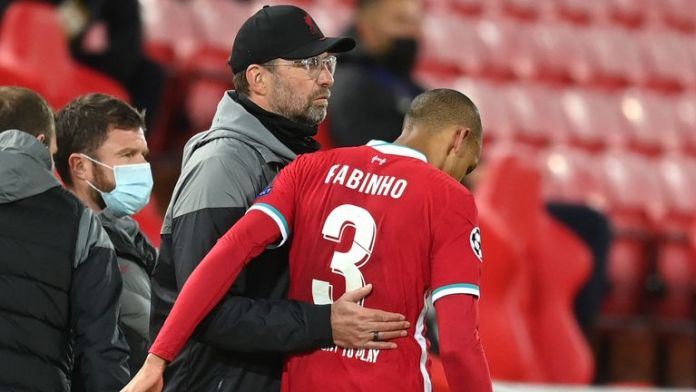 Liverpool’s dream run of winning the Champions League, Club World Cup, UEFA Super Cup and Premier League title one after the other has been brought to a horrific end.

It all started when Virgil Van Dijk was brutally tackled by Everton goalkeeper Jordan Pickford in the Merseyside derby held last week. An ACL injury has seemingly ended the Dutch centre back’s season, and Liverpool will have to do without their best player as they defend their Premier League title for the first time ever.

Jurgen Klopp managed to temporarily fill the void left by Van Dijk in the heart of defence by playing Fabinho as a makeshift centre-back. However, following Liverpool’s Champions League victory over Midtjylland, the Brazilian has been put on the sidelines as he has sustained an injury as well.

“It was a tough night. It’s a bit like in a marriage, there are good and bad times,” he told BT Sport.

“It’s not a bad time but it’s a tricky time. 100% we have to stick together and fight harder and that’s what the boys did tonight.”

“Losing Fabinho in the first half, Rhys Williams he’s only 19-years old and I think he’s played more Champions League games than Premier League games – that’s rare. We’re doing really well but its a shock for a team because now we have to sort that injury.”

“We had to make the change at half time with Jordan Henderson – he said I’m fine but in these moments you have to be responsible and the plan before the game was to give him around 45 minutes so he would be okay for West Ham. It was a hard game to play. But winning 2-0 is completely fine so that’s it – let’s carry on.”

Speaking about the injury to Fabinho, Klopp added: “Exactly the last thing we needed. I don’t know, he felt his hamstring so that’s not good. He didn’t feel it that much he said he could’ve played on but not sprinting so that doesn’t help. We will see, we will have to do a scan and see but clearly it’s not good.”

Liverpool have options in midfield, and have Joe Gomez as the only fit centre back. Klopp could either push Henderson deep or could start 19-year-old Rhys Williams in defense.