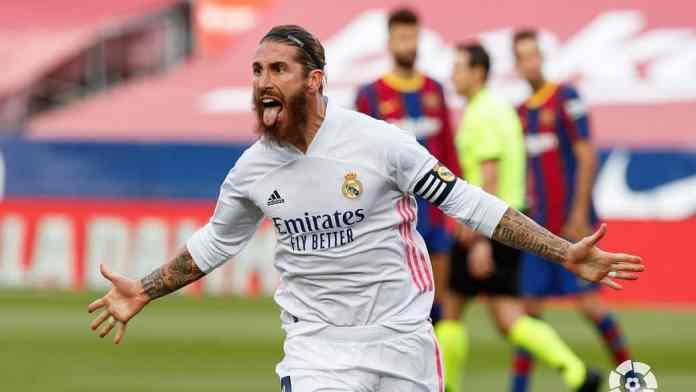 The El Clasico proved to be a treat to watch with millions of fan tuning in from across the world to witness a footballing spectacle. Ultimately in the end though, Real Madrid claimed bragging rights after a 3-1 victory over Ronald Koeman’s new-look Barcelona.

Much like any clash involving historic rivals, there were a couple of controversies and incidents which induced infuriation and confusion between both sets of supporters. However, there was none more than the penalty awarded to Sergio Ramos and Real Madrid in the 63rd minute.

It was a game-changer as at the time both teams were level at 1-1, and it gave the Los Blancos that extra incentive to secure an outright win.

However, as the highlights video reveals from 7:38, there was an initial foul on Barcelona’s Clement Lenglet before Sergio Ramos’ shirt got tugged. The VAR decided, however, that it was a penalty which Ramos converted and made it 2-1.

But, a media report now reveals that despite the linesman spotting the push on Lenglet, the on-field referee Juan Martinez Munuera decided to proceed with the penalty call anyway.

What was also curious is that despite Lenglet tugging Ramos’ shirt from the front, the fall saw the Real Madrid captain go backwards. Was there perhaps an element of simulation from his end, and more importantly, should it have been a yellow card for him instead of a penalty to Madrid?

Ronald Koeman also spoke vehemently about the influence of referees in their match results so far and was quoted as saying, “I don’t understand VAR, every decision against Barça. In five games, not one in favour and many examples: the (non) penalty on Messi against Sevilla, the (non) red cards for Getafe and today… there are always pulls in the area.”

Barcelona will now apparently file an official complaint with the RFEF – the Spanish match officials’ organisation – and decided to request for further clarification over these incidents. It will interest to see how these developments will pan out over the course of the next few weeks.