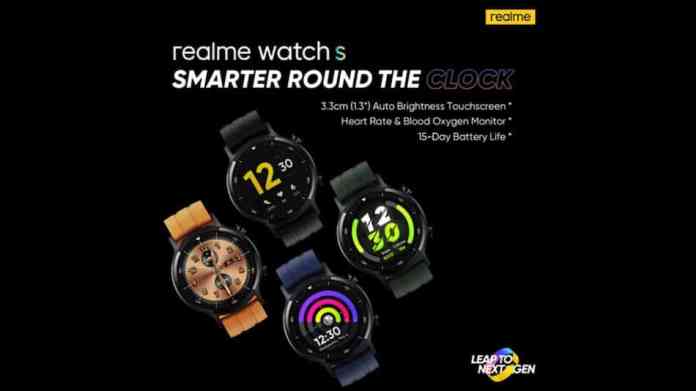 As per reports, Realme is going to launch its Watch S globally on November 2 this year. It is just like another smartwatch which has some really nice features, such as heart rate and blood oxygen monitors. One of its highlights is this watch has 15 days of battery life. Let’s get into the specifications and pricing of this upcoming Realme smartwatch.

The Realme Watch S will feature a 1.3-inch auto-brightness adjustment display, and it will have different health monitoring features, such as a heart rate and blood oxygen monitor (as per the teaser). This device will offer 16 sports modes and a huge battery life of 15 freaking days. Realme Watch S will feature a circular dial. This device will be available in multiple watch faces and strap colors.

Coming to the availability, the Realme Watch S will firstly launch in Pakistan. As of now, we have confirmed the date of November 2. We have no idea about the pricing yet. We have other news regarding another Realme device, which is the Realme Watch S Pro.

As per the reports, Realme Watch S Pro will offer a 1.39-inch touch AMOLED display and 420mAh battery. The company has not confirmed anything regarding the launch date or pricing of the Watch S Pro. but we can expect that this Pro version will also get launched by Realme in the upcoming months. This watch will feature an AMOLED display.

That’s all we’ve known yet regarding these Realme devices. We hope in the upcoming days more specifications will be clarified by the company.

Realme Watch S Pro vs Amazfit GTS 2 vs Mi Watch Revolve: Which one should you buy?