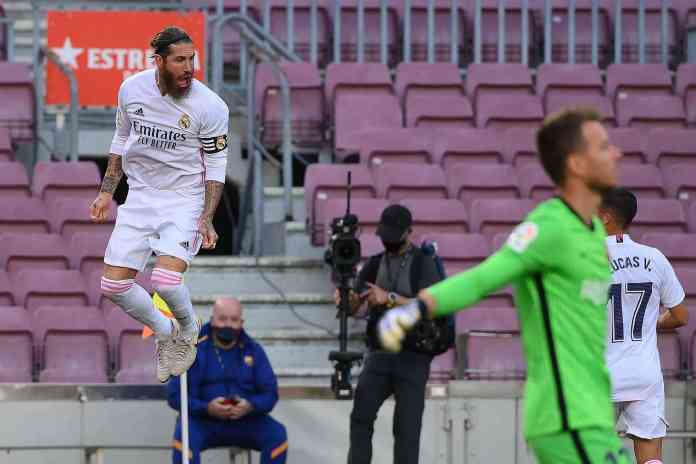 Despite the absence of fans, the first El Clasico of the 20/21 season did not disappoint, as Real Madrid managed to get the better of the hosts to push a 3-1 victory.

The stakes were extremely high for Zinedine Zidane in particular, whose team headed into the match on the back of two extremely shocking defeats to Cadiz and Shakhtar Donetsk.

The scoring opened early in the match, as Karim Benzema played a brilliant ball to send Fede Valverde on a run, and the youngster managed to score a well-taken goal from close to the edge of the penalty box.

Real’s early lead against their bitter rivals was short-lived, as Barcelona equalised only minutes after Fede Valverde’s goal. Jordi Alba whipped in a brilliant low cross from the left flank to find the feet of Ansu Fati. The youngster made an incredible run to put himself into position to finish the ball and beat Thibaut Courtois in the 8th minute.

Ronald Koeman’s gamble of starting Pedri and Fati over Dembele and Griezmann respectively did its job. However, things did not go so well for the Blaugrana in the second half.

Following a corner close to the hour mark, Sergio Ramos went down in the penalty area after his shirt was pulled by rival centre back Lenglet. The referee decided to award Real a penalty after consultation with VAR, and the Real Madrid skipper obliged to put Los Blancos back in the lead.

Barcelona created some good chances after the penalty but did not manage to take them. In the end, a newly introduced Luka Modric scored a goal in the 90th minute to guarantee all three points for Real Madrid.

Modric’s goal was the result of a scramble, and the Ballon d’Or winner did well to find the back of the net to bury all hope for the hosts.