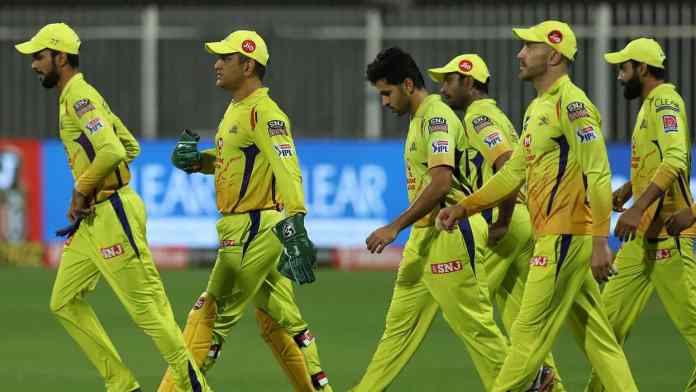 CSK endured a horrible night in Sharjah as they scored 115 in their 20 overs. In response, Mumbai Indians came out all guns blazing and finished the chase with Ishan Kishan leading the charge with an unbeaten 68*. The 10 wicket win was MI’s first against CSK since the inception of the Indian Premier League.

Here are five records that the team from Chennai created in the defeat to Mumbai, which all but drowned their hopes of qualifying for the Playoffs:

Right after Faf Du Plessis knicked the ball to Quinton De Kock off Boult’s delivery, CSK’s top order collapsed. As a result, they were 3-4 after 2.5 overs. Only Kochi Tuskers Kerala have been four down with a lower score, with their scoreline reading 2-4 against Deccan Chargers way back in the 2011 season.

The likes of Gaikwad, Rayudu, Du Plessis and Jagadeesan, were all sent back to the pavilion for a combined score of 3 runs after a fiery spell by Boult and Bumrah. This is by far the lowest combined total by the top 4 batsmen after once again Kochi Tuskers’ top 4 batsmen had a cumulative score of 4 runs.

3) Second most wickets lost in the powerplay

CSK’s tumbling batting order saw them lose 5 wickets in the powerplay, as the score read 26-5 after the end of 6 overs when Dhoni and Curran had just about come out to bat. Only Kochi Tuskers had a worse performance start in the Powerplay, losing a total of 7 wickets in the first six overs.

The fact that they were 21-5 after Jadeja’s departure meant that most of the combined top and middle order were out after failing to reach even a double-digit individual score. Interestingly, CSK have suffered this same fate twice before and both times it was against Mumbai Indians itself, once at the Wankhede in 2013 and the other at Chepauk in 2019.

This was the first time in their 11-years’ history that Chennai Super Kings suffered the ultimate ten-wicket loss to any opponent. That it came against arch rivals Mumbai Indians, would have hurt MS Dhoni’s men even more. MI managed to chase down the low target of 115 in a matter of 12.2 overs led by openers Ishan Kishan and Quinton De Kock.

Top 7 most expensive all-rounders in the IPL 2021 Auction

ABOUT US
The ultimate Technology & Sports news website, TechnoSports caters to the latest news for all its readers round the globe.
Contact us: [email protected]ports.co.in
FOLLOW US
© 2020 TechnoSports Media Group