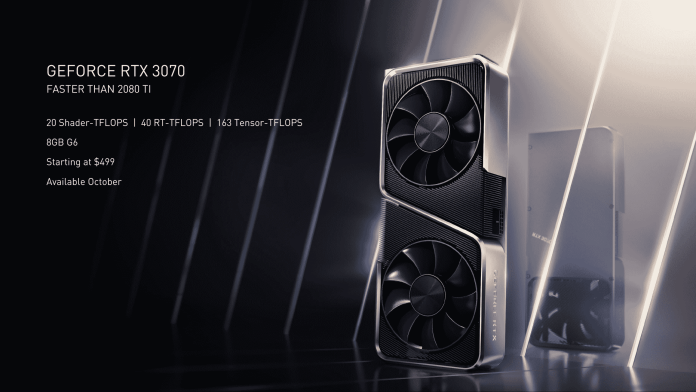 The world leader in graphics manufacturing Nvidia has been pretty busy this year. With its deal of Acquiring ARM moving forward, the GPU manufacturer is all set to impact the Semiconductor market. On the other hand, its graphic processors are still the most preferred choice for gamers around the globe.

We have the latest scoop on our hand because Nvidia’s upcoming GeForce RTX 3070 GPU has its benchmark details leaked. The graphics processor is set to launch next Thursday and will reportedly offer more excellent performance than the famous RTX 2080 Ti.

At the core of the RTX 3070 graphics card is the GA104 GPU. It is one of the many Ampere GPUs that we will be getting in their gaming segment. The GA104 GPU is reportedly the second-fastest Ampere chip that Nvidia offers.

The GeForce RTX 3070 comes with a total of 46 SM units, which is a total of 5888 CUDA cores. The RTX 3070 also packs the next-generation of Ray-Tracing core. Tensor cores, and a brand-new SM or Streaming multi-processor units.

The processor also features an 8 GB of GDDR6 memory and has a speed of 14 Gbps. While featuring an uncut bus interface of 256-bit, the module delivers a cumulative bandwidth of 448 Gbps.

The alleged benchmark results make the Nvidia GeForce RTX 3070 a more viable option over the RTX 2080 Ti. These are all just leaks and rumours for now and must be taken with a pinch of salt. As to what will be the actual performance of the new GPU remains to be seen.