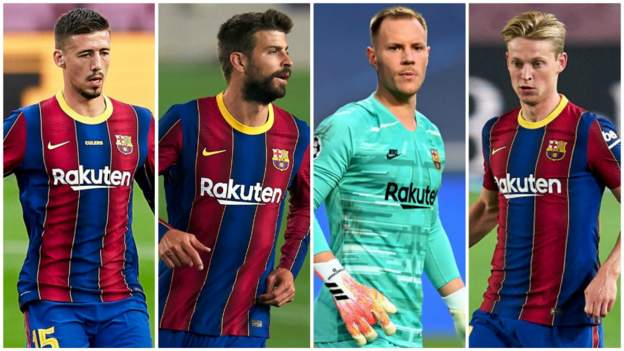 Barcelona has been through tough times both on and off the field. Although the appointment of Ronald Koeman as manager has improved the on-field issues, the off-field issues still remain.

There has already been a successful motion of no confidence against club president Bartomeu and on the other hand, the players are unwilling to take a further pay cut.

Gerard Pique has extended his contract until 20 June 2024 and his buy-out clause now stands at 500 million euros. The contract extension will be based on a number of conditions including the number of appearances he makes starting from the 2021-22 season. The former Spanish defender is playing his 13th season for Barcelona and would go on to play 16 seasons at Camo Nou till 2024.

The German goalkeeper has signed a contract extension until 30 June 2025 and his buy-out clause is also set at 500 million euros. He is one of the best goalkeepers right now in world football and this contract extension is set to make him the second best-paid player in Barcelona, only behind Lionel Messi.

Clement Lenglet has extended his contract until 30 June 2026 and his buy-out clause stands at 300 million euros. The 25-year-old French defender will be playing at Camp Nou until his early thirties.

Frenkie de Jong is the youngest among the group of players who signed contract extensions. The 23-year-old Dutch midfielder extended his contract until 30 June 2026 and his buy-out clause stands at 400 million euros. He is set to become an integral part of the Barcelona midfield over the coming years.