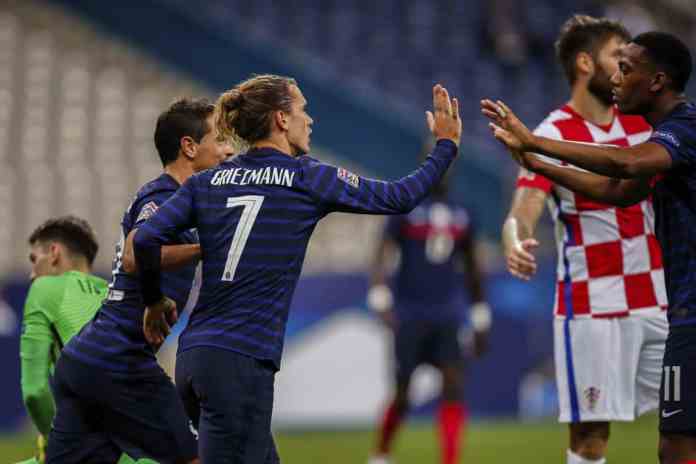 In a rematch from the 2018 World Cup Final, France once again defeated Croatia with Antoine Griezmann scoring the first goal. Griezmann played out through the middle with Mbappe and Martial covering the wide areas as the visitors won 2-1 against Croatia in Zagreb.

In Barcelona, Griezmann is still not being played in his natural position despite the departure of Luis Suarez to Atletico Madrid. Ronald Koeman has ditched the long favored 4-3-3 for a 4-2-3-1 that sees Messi play as the frontman and Griezmann out wide on the right-hand side.

Speaking after the victory in Zagreb, Griezmann said, “I feel good, I feel good, because the coach knows where to put me and, therefore, I benefit from it, as well as the confidence that the coach and my teammates give me.”

Didier Deschamps has been vocal about Ronald Koeman’s incorrect use of the forward at Barcelona. Griezmann played out of position under former managers Setien and Valverde as well.

During his glory days at Atletico Madrid, Griezmann played as a classic striker, often supplemented with another forward leading the line. He is a great finisher but lacks the ability to create plays at the top level.

Messi played out on the right-wing before but has now been deployed at the front of the line. The reason behind it being the Argentinian’s lack of defensive work or the absence of tracking back from his game. This is the main reason why Barcelona has struggled defensively since the departure of Dani Alves.

With Messi upfront, the need for him having to trackback to defend has been eliminated. However, Griezmann is the victim of Koeman’s solution, as he is still being played out of position.

With the goal in the 8th minute yesterday, Griezmann is among France’s top 5 goalscorers of all time with Henry, Giroud, Platini and Trezeguet in front of the Barca man.