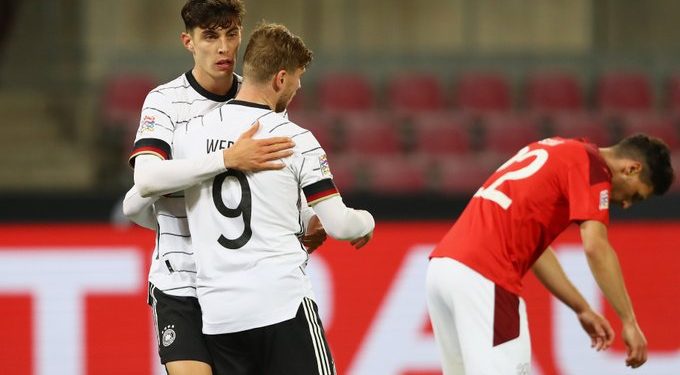 The beginning of the last round of fixtures on this international break is highlighted by Germany vs Switzerland and Ukraine vs Spain. Two big matches that played out very differently.

After going two down very early in the match, Germany managed to get to the break with the scoreline reading 1-2. Kai Havertz joined Chelsea teammate on the scoresheet, equalising 10 minutes after half time, only to have the lead blown by a second Mario Gavranovic goal, that almost broke the net.

As sharp as Germany looked on the front foot, the defense looked very shaky and this match was a testament to why Joachim Low had opted for three at the back against Ukraine.

Switzerland played a great game, giving the former World Cup winners a run for their money throughout the game and deserved to be up by more.

However, Gnabry flicked the ball right past Yann Sommer at the hour mark to make it 3-3 and equalise again within 5 minutes. The scoreline did not change any further as the two teams shared a point each.

It was a great sight to see the fans come back and cheer on from the stands once more. However, unlike their match against Germany, there were no goals to be celebrated before 76 minutes.

The affair was not boring by any means, and both teams had plenty to be optimistic about. The hosts were resolute in their defending and managed to keep a clean sheet to beat Spain 1-0.

Ukrainian keeper Bushchan again put up a brilliant performance to keep the Spaniards out despite the numerous chances created.

Tsygankov put the hosts ahead, smashing the ball past De Gea after a beautiful ball from Yarmolenko, 15 minutes before the final whistle blew.