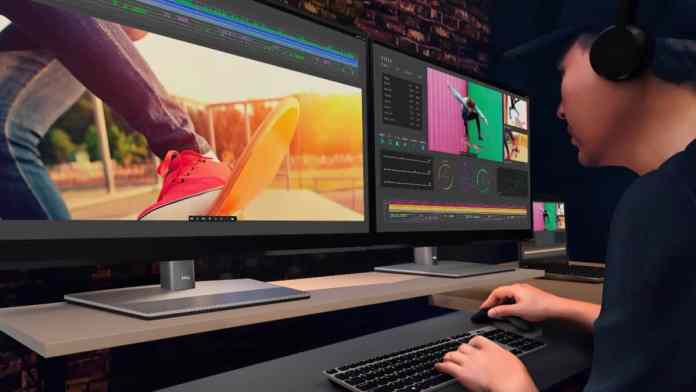 Dell’s upcoming UltraSharp 32 HDR PremierColor UP3221Q is the new and powerful display to be launched by the manufacturing giant. The new display UP3221Q is the world’s first commercially available display that comes with 2,000 dimming zones powered by the new min-LED technology. It has left behind Asus’s ProArt PA32UCX-PK and the new Apple Pro XDR Display.

But to our dismay, the new monitor from Dell comes with the only 60Hz of refresh rate.

This is rather low, considering the price tag which the display carries. On the side note of disappointments, the upcoming UP3221Q does not support the latest HDMI 2.1 port. However, it does support two HDMI 2.0 ports, which are quite common in high-end displays these days, so it is not much to speak on. The new monitor, however, also supports DisplayPort 1.4 and also Thunderbolt 3 connections.

It also sports three USB Type-A ports, including two USB 3.2 ports. The company reports that the new display has a 10bit and 4K IPS panel, which peaks at 350 nits brightness in SR mode and 1,000 nits in HDR mode.

The new UltraSharp 32 HDR PremierColor UP3221Q is certified as VESA DisplayHDR 1000 compliant. The new monitor also has a contrast ratio of 1,300:1 and comes with a response time of 8ms for the grey-to-grey delay. The device also supports up to 178°/178° viewing angles. The new Dell monitor comes with a Calman-powered calibrator. Reportedly, the new UP3221Q will cover 93% of AdobeRGB and 99.8% of P3, which is not that impressive compared to its competitors.

The new Dell monitor is good to purchase among the present high-end smart displays and will start shipping from November 5. The display will be available for $4,999.99, which will be quite heavy on our pockets.