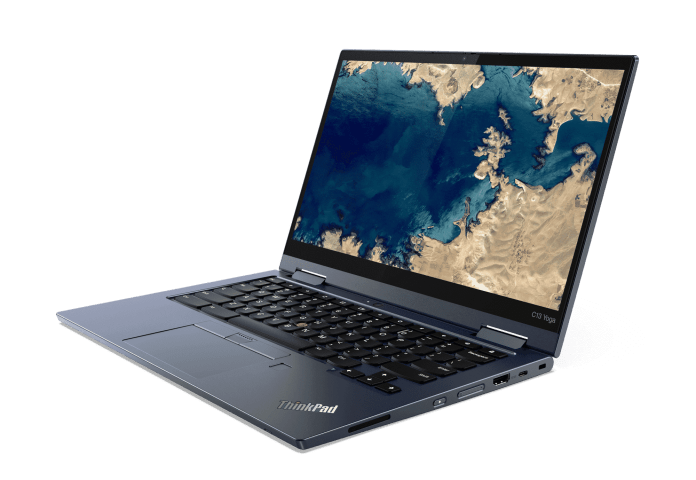 Chromebooks have always been boring and meant for education only; however, in 2020, this norm has changed a lot. More and more OEMs are putting effort to make Chromebooks business ready and usable for professional purposes as well.

The Lenovo ThinkPad C13 Yoga Enterprise is a similar approach by the Chinese OEM, who looks to makes this Chromebook the first one to offer a “pointing stick” cursor. One of the major selling points of Lenovo’s ThinkPad series is the pointing stick which is a small joystick in red colour (for Lenovo), with which you can move your mouse speedily to use the cursor.

Google has now allowed OEMs to use this feature and thus the Lenovo ThinkPad C13 Yoga Chromebook Enterprise edition does have so for business users. I do not know how many opt for a Chromebook for professional work, however, with faster processors and good specs, a lot of people do like them as they do not cost much.

AMD’s latest Ryzen 3000C series processors help to deliver great performance for everyday use and so it will be powering the new ThinkPad C13 Yoga Enterprise laptop.

If you do not need a TrackPoint pointing stick, Lenovo does provide a normal version of the ThinkPad C13 Yoga Chromebook Enterprise. So, the entire range of the new Chromebooks will be available to buy “shortly,” at a modest starting price of $579.

The Cupertino giant has been making iPhone for almost over a decade now and finally it seems the company has reached the...
Read more
Technology

The Red team has made some bold announcements yesterday with its new RX 6000 series graphics cards based on the RDNA 2...
Read more
Gaming

THE GAME AWARDS EXPANDS STREAMING AND BROADCAST FOOTPRINT IN INDIA

This year with the launch of Intel's new 11th generation Tiger Lake Processors, OEM's are in a rush to upgrade their notebooks...
Read more
Laptop

Lenovo ThinkPads have always been known for their quality and reliability; that's why they are so popular among consumers who look for...
Read more
Laptop

Looking for a budget laptop with enough horsepower to drive your daily need? Then you have landed at the perfect place as...
Read more
Technology

The current pandemic has ravaged the world, and this has resulted in drastic changes in our day to day lives. With people...
Read more

The Cupertino giant has been making iPhone for almost over a decade now and finally it seems the company has reached the...
Read more
Google

There are two latest smartphones from Google in the market: Google Pixel 5 and the Google Pixel 4a. Both of them are...
Read more
smartphone

The Red team has made some bold announcements yesterday with its new RX 6000 series graphics cards based on the RDNA 2...
Read more
Apple

As per the reports, Apple is in the works to make its own search engine that will replace Google. As per...
Read more
Load more

Acer has launched its new series of Swift and Aspire laptops in India. Among the released laptops is the Acer Swift 5,...
Read more

The Cupertino giant is supposed to host a dedicated event next month to mark the launch for their first ARM powered MacBooks....
Read more

Avita is one of those Chinese laptop manufacturers that bring unique, thin and light laptops at affordable prices. This makes the brand...
Read more

Looking for an entry-level gaming laptop? Is your budget around Rs.50k? Then this Amazon Great Festival can help you get your dream...
Read more