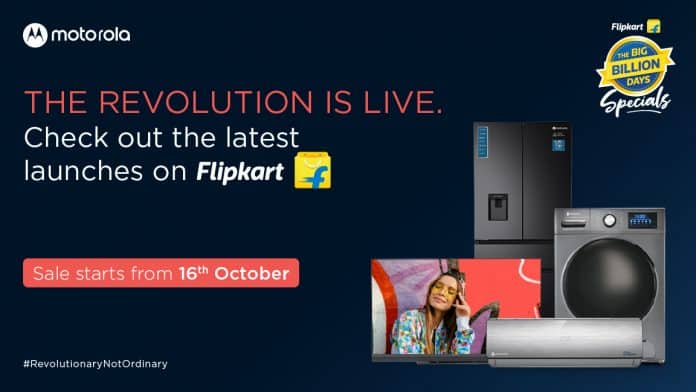 The company has also released a range of smart Refrigerators which starts from Rs 51,990. Also, smart air-conditioners starting from Rs 32,999 and smart washing machines ranging from Rs 23,499 is also been launched by Motorola.

Smart TVs by Motorola are powered by the MediaTek MT9602 processor. The smart TVs also come in HD, Full-HD, and 4K model variants.

The two Smart TVs launched by Motorola are under its Revou series and the other two under its ZX2 series.

Motorola smart washing machines will come in automatic and semi-automatic variants. They have different wash capacities coming in the range of 10.5kg, 6kg, 8kg, 6.5kg, and 5kg. It comes with personalized washing preferences, TruSmart sensors along with state-of-the-art foam-level and also temperature and speed sensing capabilities.

The Flipkart’s Big Billion day will go live on October 16 and will enable the option for users to purchase the new release from Motorola.